Problems of The 1999 Constitution of Nigeria: Major Challenges & Defects 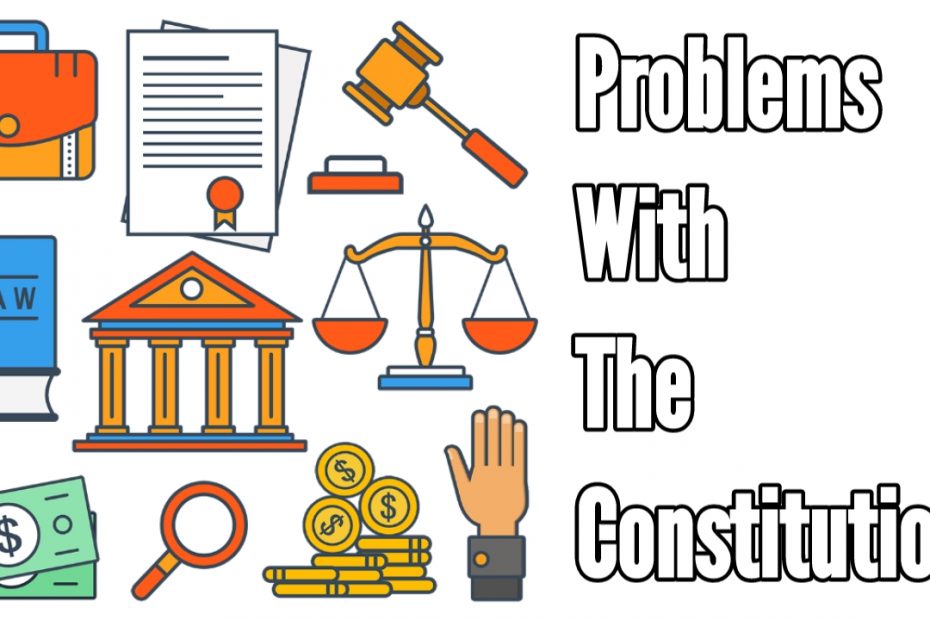 Problems of The 1999 Constitution of Nigeria: The 1999 Constitution is undoubtedly the supreme Law of Nigeria and such valuable distinction demands a near perfect delivery in terms of unquestionable integrity as far as law making is concerned. Since its adoption on 29th of May 1999, the Supreme Law has elicited countless debates from scholarly thinkers, field professionals to the ordinary citizens. Everyone is interested to know if the law that supposedly governs all has justified its supremacy and integrity.

The Constitution is divided into 8 chapters, 15 parts and 17 schedules. Altogether it is a law with 320 sections. Amendment has been made in respect to the grundnorm but not to the extent that issues at the present prior to the amendment have been resolved. Granted, the makers of the law are not infallible individuals. 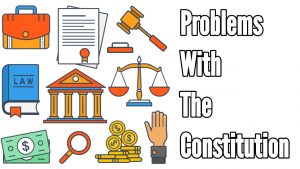 Problems of The 1999 Constitution of Nigeria

Nothing created, promulgated or enacted will have zero trace of faults or loopholes. Nonetheless, there are errors or faults that can be trivialized while there are others so pronounced that ignoring them will be downright ridiculous.

Recommended: Differences between presidential and parliamentary system of government

Major Problems of the 1999 Constitution of Nigeria

1. Gender Inequality is still a realistic issue: While on this subject, it will not be out of place to analyze the potential of adequate female representation in the Nigerian parliament. However, the numbers are not encouraging to say the least. As of this writer’s knowledge, just less than 15% of the whole Law Making body and the political sector are occupied by women.

Many may not see it as a constitutional issue but that is a concern that the Constitution needs to address sufficiently. Even the law itself which appears to have no tolerance for any form of inequality especially referring to gender has subtly marginalized women in citizenship status. Apparently, by virtue of Section 29(4) of the Constitution, anyone of full age can renounce Nigerian citizenship but it went ahead to mention that “any married woman” is deemed to be of full age and thus can renounce citizenship. 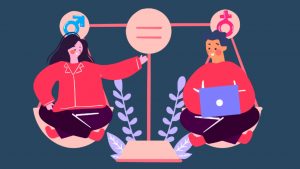 How the constitution is the problem of Nigeria

The question is, why the qualification? Could it not suffice to provide that anyone, male or female who has attained full age can renounce citizenship? The further description of the “full age” meaning is superfluous and quite unnecessary.

When a female or male attains the majority age, citizenship can be renounced. The marital status of a woman in determining if she can renounce citizenship or otherwise is an evident case of gender disparity. Little and head scratching details in the law automatically gives a male dominated society intitial impression that women are still on the lesser account.

Also see: 6 (six) Major Types of constitution you should know

2. Discrimination is not vehemently proscribed: Although section 42 of the Constitution has clearly spelt out the fundamental right against discrimination, it is still a personal right that must be enforced by a Court of Law. Hence the individual must understand that he or she has a right in the first place and that there is discrimination before there can be a right of redress of the wrong.

This is particularly difficult in a country like Nigeria of which most endeavours are characterised by nepotism, tribalism and discrimination in general. It becomes almost natural for people to get used to the decayed system and create the impression that it is acceptable no matter where. One of the reasons for this evolving challenge is the lack of content in law provided by the Constitution in addressing the issue.

Problems of The 1999 Constitution of Nigeria

Discrimination takes different shapes and forms whether in politics, families, business relationships or government. Even when the Constitution has made provision for Federal Character in Section 14(3), one can strongly argue that it is only in a motivational intonation or at best, directionary and not mandatory in nature.

It lacks compulsion which has given highly placed officials leeway to be tribally selective without being quality oriented. It will continue to be a recurring decimal until the Law of the land stomps an end to it in a compelling fashion. Commendably, the courts have interpreted the Constitution to grant reprieve and justice to victims of repugnant customs, especially in respect to female inheritance. Regardless, the Constitution has more work to do.

3. Marginalized Judiciary in a skewed Federal System: There are three arms of government in any democratic country and it is the irrebutable presumption that the Legislature, Executive and the Judiciary are on the same pedestal as far as running the government is concerned.

Problems with The 1999 Constitution of Nigeria

The reason for that has been the failed attempt of the Constitution to create a balanced system of government after these events but it does not still justify the lazy efforts of the law makers in marginalising the States in certain aspects.

The essence of this is to act as a “government purse” from which the salaries and allowances of the public officers will be paid from. What is astonishing is the fact that the High Courts of all the States are not paid directly from the Consolidated Revenue Funds of the respective State. Instead, it is from the purse of the Federal Government that judges of the States are paid from.

Should not the State Government pay the State Judges? Why is the Federal Government allocating funds directly to the State Judiciary instead of the States itself? This is still yet to be completely addressed.

This is why the Judiciary is campaigning for financial autonomy because not only are they being marginalized but they fear they will completely lose their special aura by the controlling habits of the other arms of government (namely Executive and Legislature). Some months ago, JUSUN commenced on strike action clamouring for the Judiciary to be financially independent and ultimately holistic Judicial Independence.

This was after years of tormenting experiences of the Judiciary staff been heavily underpaid or not paid at all because the funds were not sufficient enough.  Even in the aspect of appointment of judicial officers, there seems to be a lot of amendment the law makers have to sacrificially ensure to keep the integrity of the Judiciary alive while it lasts.

4. Immunity of Certain Public Officers from Prosecution: This is a delicate subject matter which should be approached with  legality and logicality. The Constitution has declared in its provisions according to Section 308, the inability of any Court in Nigeria to compel the appearance of a sitting President or his Vice and a sitting Governor or his Deputy. This also provides clearly that the mentioned public officers are immune from any form of prosecution for the duration of their tenure.

Challenges and defects in the Nigerian constitution

Debates have arisen with some suggesting that prosecution of these officers will prevent them from concentrating in governance which is the main responsibility. Others have supported the immunity clause in civil matters but not in criminal matters, while the rest have different opinions. The immunity clause is not to be seen (as it is usually perceived) as a blessing in disguise for those who are in the positions aforementioned. That was not the intention of the law makers when drafting this law.

The centre of focus has always been on protecting the image of the Nation rather than the person ruling it. It has always been on letting the machine called the government, run without hitches or delay. Can one confidently say that the inclusion of the immunity or exemption clause has been beneficial and the intention has been justified? The immediate answer will be in the negative.

Thus, the Constitution needs to address the problem associated with allowing political leaders to live with their criminal activities while on seat and wait till they leave the seat before they are prosecuted.

Definitely there is the possibility of impeachment which will open the floodgates of prosecution. But the real issue arises when there is no impeachment threats or indication of discipline of the officers. In this regard, the Supreme Law should amend the necessary provision and come up with a more suitable alternative that will place the government and the governed under the same roof of accountability.

All men who are under the law should remain under the law. No political office or elaborate position will serve as a leverage. Instead, it should serve as a strong deterrent for any wrong doing worthy of prosecution.

Problems of the Nigerian constitution of 1999

This has led to the marginalisation of one of the tiers of government and there seems to be no feasible efforts to cause a change in direction. Most have canvassed that the local government is not viably equipped to handle such responsibility but once again the Constitution has centralized most control on State and Federal Governments.

Also see: Meaning and Functions of the three Arms of government

Solutions to the Problems Of The 1999 Constitution

The 1999 Constitution of Nigeria has glaring issues that need to be addressed as immediate as possible. The first point of call is to amend the provisions which have been discussed in this article and in other articles for years. The Constitution should recognize women participation in politics and possibly ensuring that there is absence of any form of discrimination in any administrative or political sector of the Country.

Emphasis should be made on Federal Character and it should have a compelling tone such that if there is no adequate representation of the geopolitical zones in a governmentally created body, office or agency,  the top public officers should be sanctioned appropriately.

Also, the Legislature can go a long way to review the Federalism issue. Let there be a fair and equal share of powers among the Government at the Federal Level, State level and the Local Government level.

If there is inadequacy in performance at the grassroot level, the State and Federal Governments can unitedly overreach and develop, build and train persons who are fit and proper to enhance their local governments. In addition, the Judiciary should be financially independent. The National Judicial Council should disburse the funds necessary for the upkeep of Courts and renumeration of judicial staff. The Constitution should be amended in order to fit in with the current realities of the Nation.

The Immunity clause should be looked deeply into so as to provide a just and equitable standard of responsibility for those in the highest positions of power. Prosecution should be allowed should they fall short of the law but not in all matters. It is this writer’s humble opinion that in respect of murder, rape, sponsoring terrorism, homicide and other related crimes, they must be prosecuted.

In conclusion, we have seen that the 1999 Constitution has many praises and has many faults. Some of them were addressed in the article with the feasible solutions included. Over the years, we have witnessed the growing efforts of the Legislature but there is still work to be done especially in the Constitution.

As earlier stated in the article, as a Nation we are still in the wake of several external leaderships which is a very strange opinion to make given that we are independent and democratic. But this opinion is based on the fact that some of these provisions and clauses were inherited from past administrations and regimes.

It is a new era; the Democratic era; the era of the people. Therefore laws should be enacted principally to enhance the welfare of the people ensuring that government remains accountable to the populace, even if it’s the Supreme Law.

3 thoughts on “Problems of The 1999 Constitution of Nigeria: Major Challenges & Defects”