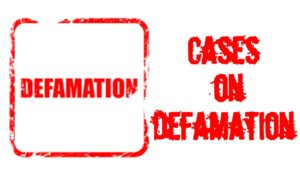 Must read: Awolowo v. Federal ministry of internal affairs (Case on the right to fair hearing in Nigeria)

The facts of the case of Sketch publishing company Ltd v. Alhaji Azeez A. Ajagbemokeferi are as follows:

Ajagbemokeferi (The plaintiff/respondent) was a renowned Islamic preacher based at Ibadan, Nigeria. His name Ajagbemokeferi, which means “his vocality and pagans has converted many to Muslim religion”, was given to him because of his enthusiasm in Islamic evangelical works. He was further conferred the chieftaincy title of “Otun Balogun Oniwasu” by the Chief Imam of Ibadan in August 5th, 1978. This made him the second in rank to the general of Muslim preacher.

The first defendant was the publisher and printer of a newspaper known as “Daily sketch”, while the second defendant was the editor and publisher of a monthly newspaper called “Voice of Islam”. In 1979, a publication of the Voice of Islam which was described as Almanac contained the photos of many eminent Islamic leaders including that of the Ajagbemokeferi the plaintiff. The defendants (first and second defendant) jointly printed and published under the plaintiff’s photograph the following words in Yoruba:

In English this means that “the chieftaincy title of the second in rank to the general Muslim preacher held by the plaintiff is a worthless and valueless Chieftaincy just like the chieftaincy to the title of impostors and contrary to the tenets and teachings of Islam. By the word “ANOBI” (Prophet Mohammed) woe betides such holders of such chieftaincy and their place is in hell after death.”

Following the publication of this work, the plaintiff instituted an action in the high court of Oyo state claiming 1million naira damage and an injunction for libel falsely and maliciously published of and concerning him. The trial court, per Ayorinde, J. found that the publication was actually defamatory to the plaintiff. However, he held that the comments made under the plaintiff’s photo were on a matter of public interest and a religious matter. The case was therefore dismissed since the defense of fair comment was sustained.

Whether or not having regards to the facts of the case, the defense of fair comment was available to the defendant/appellant.

The supreme court conspicuously promulgated that “in this case, the evidence adduced show that from the time the words complained of were allegedly published of and concerning the respondent, he was not avoided or shunned; nor was his status lowered in the estimation of right-thinking men of his community; nor was he exposed to hatred, contempt or ridicule. There was no evidence that the imputation on him in his office, profession, trade or business. He is still being represented as a prominent and respectful Islamic preacher by his local community. Therefore, the statement was not defamatory.”

He therefore has a duty to comment on the conferment of the chieftaincy on the respondent as it was a matter of public interest. The publication, even if defamatory, is well covered by the defense of fair comment. The court went further to state that religious matters may amount to matters of public interest, the publication of or about which may validly avail as fair comment. The comment in this case is on a religious matter and therefore affords a defense of fair comments to the defendant.”