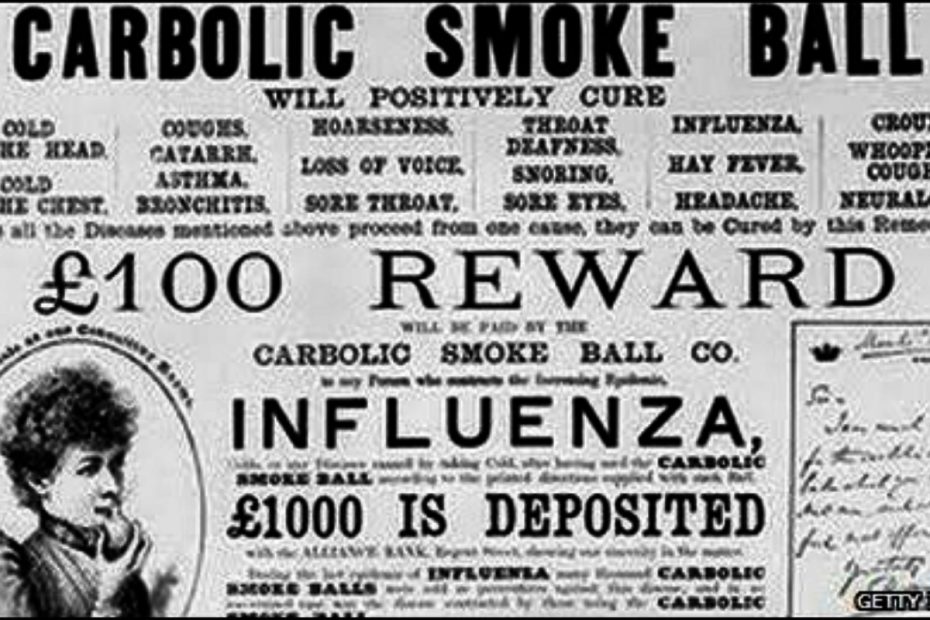 Carlill v Carbolic Smoke Ball Co: This notable case forms an introductory part of contract law, offer, being the first requirement of a valid contract. The case establishes the principle that a binding offer can be made to the public and in such a case, acceptance need not be communicated as it goes contemporaneously with the performance of the offer so expressed. 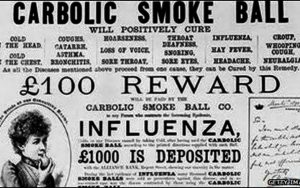 Recommended: Countries with the best Judicial system in the world

a. Whether an offer made to the whole world can rise to a binding contract

Also see: Facts, Issues and decision of the court in Smith v Selwyn

The Defendants in this case are producers of smoke ball. They published an advert in a newspaper saying that they would award the sum of 100l to any person who used their smoke ball and contract Influenza. This was at the time when influenza was at its increase. On their smoke ball product was an imprint showing directives to be followed in using the smoke ball.

What were the issues raised by the carbolic smoke ball Co in its Defence?

The directive specifies 3 times daily for 3 weeks; that if any person complies with this directive and contract influenza or cold related illness, Carbolic Smoke Ball Company would pay the person 100l as stated. The Defendant further stated in the advert that they had deposited the pledged 1000l with Alliance Bank thereby showing their honesty, transparency and readiness to fulfill the promise. They further pointed out how this carbolic smoke ball had been used by people in the previous influenza epidemic to prevent influenza and there was no report that the people who used the carbolic smoke ball contracted the disease.

Recommended: Countries Where Prostitution is Legal around the World

They further stated in the advert that the product was affordable, long lasting and capable of being refilled when exhausted. Then, they provided their company’s address in the newspaper advert. The Plaintiff, a lady, relying on the content of this advert purchased the carbolic smoke ball product from a chemist shop.

She then used the product as was provided in the company’s product directive imprinted on the smoke ball. She nevertheless contracted influenza. She then brought an action to this effect. The Counsel to the Defendant contended that a binding contract did not exist between the Plaintiff and the Defendant in the given circumstance. They further contended that the content of the advert was a mere declaration of intention and an invitation to threat and not a promise capable of establishing the existence of a valid offer.

They further argued that the expression in the advert is too wide and obscure to be capable of establishing a contract. Moreso, there was no certainty of time or a specified time frame for the occurrence or performance of the purported contract, and also that it could not possibly be verified as to whether any claimant or the claimant in this case actually used the smoke ball and contracted influenza, since any person who is infected with influenza could claim that he had contracted the influenza after using the product.

In fact, when the Plaintiff wrote to the company after contracting the influenza, the company rather invited her to come and use the smoke ball under their watch. The Defendant further contended that for a contract to arise there must be an acceptance duly communicated to the offeror. The act of the Plaintiff using the smoke ball which was done in private therefore could not have amounted to a valid acceptance.

The Defendants also based their contention for their non-liability on the fact that if at all a binding contract had arisen; it should only be with persons who had brought the smoke ball product directly from the company of which the Plaintiff had not. The defendant also argued that such setting should be safer interpreted to be a wager contract or which its occurrence was not in the control of the parties and therefore void, or it be interpreted to be an insurance policy of which the event in question was uncertain and therefore did not fulfill the requirement of a valid insurance policy.

The Plaintiff on his own side argued that there was a valid contract between her and the Defendant. She contended that the requirement of a valid contract were met; that the publication made on the newspaper was a promise which amounts to a valid offer, since it was reasonable to believe that they were to act upon it and not a mere boast as was shown by their indicated overt act of depositing 1000l with Alliance Bank. Furthermore, that there was a valid acceptance on the side of the Plaintiff. Although the offer was not made to the Plaintiff specifically, it was rather an offer made to the whole world of which any person was free to accept by performing meeting with the specified condition. The acceptance need not be expressly communicated; rather, mere performance of the said offer was a complete acceptance. Since it was an offer to the whole world, the offeree need not give a notice to the office before its performance; that once the conditions are fulfilled, the acceptance is complete.

What is the ratio Decidendi of Carlill v carbolic?

The Queen’s Bench held in favour of the Plaintiff. Up to the Court of Appeal, the court considered all positions and held that from all indications, there existed a valid contract between the Defendant and the Plaintiff. The expression contained in the newspaper advertisement was clearly a promise to pay the sum of 100l to any victim of influenza who has used the smoke ball as directed. This was also validated by the Defendant’s act of depositing 1000l with Alliance Bank. This suggests an intention to fulfill the promise, therefore the Defendant’s act cannot be said to be a mere puff. Further, the promise gave rise to a binding contract.

The court found in favour of the Plaintiff to the effect that there was a binding contract of which the Defendant was bound to perform.