6 Exceptions to the Rule in Pinnel’s Case

On that note, if you have been searching the internet to know what the rule in pinnels case is all about, or the exceptions to the rule in pinnel’s case, you are in the right place. Just make sure that you read the content of this article painstakingly so that you will grasp all that is explained here.

You may also want to read:

What is the rule in Pinnel’s Case?

exceptions to the rule in pinnels case

Take for instance, If Mr. Ben owes Mr. John $10,000 and Mr. Ben, at the request of Mr. John, pays just $5,000 of the amount, Mr. Ben will not by that payment be discharged of his obligation to pay Mr. John the balance. The reason is because, Mr. Ben is already bound to pay the total amount of $10,000. By paying part of the amount, he is not doing anything more than he is bound to do.

In other words, he has paid no price for Mr John’s promise. Absence of consideration is therefore the basis of the rule in pinnel’s case. It is usually called promissory estoppel in contract law.

The video clearly explains the fact, issues and decision of the court in pinnel’s case. I strongly recommend that you watch this video before reading this article in full. Trust me, you will love it.

Also read: List of law reports in Nigeria today and their abbreviations

Exceptions to the rule in Pinnel’s Case

Below is a detailed explanation of some of the exceptions to the rule in pinnel’s case (promissory estoppel):

1. If the payment of the lesser sum is made in a mode different from that originally agreed upon:

The Rule in pinnel’s case will not apply if the payment was to be in cash, but the lesser amount was paid in kind. For example: Mr Ben owes John $1000. At John’s request, Mr Ben gives John a bag of rice valued at N800 in return for John’s promise not to demand the balance of the amount owned. The giving of the bag of rice constitutes a new element in the method of payment and therefore satisfies the requirement for consideration necessary to support a contract.

The legal reason behind this is that, by asking for a bag of rice from Mr. Ben, John may have considered it more useful to him than the sum of $1000 owed him and hence that bag of rice constitute a price or consideration for John’s promise to forgo the balance. It is pertinent to also note that this exception will apply even when price of the form which was used is of lower price. It is indeed one of the exceptions to the rule in pinnels case.

exceptions to the rule in Penny v Cole

2. Payment of a lesser sum at an earlier date

Take for instance, If the full amount is due in June and the creditor request the debtor to pay him part of it in March in return of his promise to forego the balance, the payment at earlier date in March constitutes a new element and satisfy the requirements for consideration.

3. Payment of a lesser sum in a different place

This exception to the rule in pinnel’s case will apply where the payment is made at a different place from place originally appointed for the payment. For instance, if Mr. Ben owes John $1000 payable in Nigeria but they both meets at Oxford Street in London during a summer holiday.

John request Mr. Ben to pay him $500 there and then in return of John’s promise never to ask for the balance. If Mr. Ben pays this money to John in London as requested, that payment will discharge his indeptedness to Mr. John and he cannot afterwards demand the balance.

21 Leading cases in the law of contract

4. Where the sum is unliquidated or disputed:

It is also an exception to the rule in pinnel’s case where the sum is unliquidated or dispute. In this situation, payment of a smaller sum will operate satisfaction from larger sum. For example, where the lesser amount is paid as part of a comprehensive settlement involving a variety of claim on both sides.

In Grayshot Enterprises Ltd v Minister of Agriculture, the appellant had on 29 January 1997 obtained judgment against the respondent from the High Court in a suit filed on the undefended list of sums of money from goods supplied. The judgement was declared in the following terms:

The court held that the rule in Pinnel’s case does not apply where the creditor’s claim on its amount is disputed in good faith. In such a case, the value of the creditor’s claim is doubtful and the debtor therefore provides consideration by paying something, even though it is less than the amount claimed. 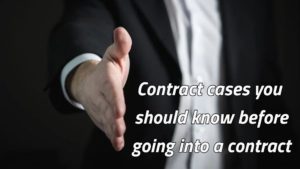 The Rule in pinnels case will not apply where for instance, A owes money to different persons, B, C, D and E and the amount of money in A’s possession is such that all the creditors cannot be paid in full. They may agree amongst themselves to accept a fraction of their individual debt from A in discharge of the whole sum in each case.

Such an agreement is binding on all of them and none of them can subsequently sue A for the balance of his debt. This is also called composition with creditors.

6. Part-payment of a debt by a third party

Yes, this is also one of the exceptions to the rule in pinnels case. Where there is part-payment of a debt by a third party the rule in pinnel’s case will not apply. For example, the debt is owned to only one person and the debtor unable to pay for it. A third party offers to pay a smaller sum in discharge of the whole debt.

Once the creditors accepts the money proffered by the third party, he cannot sue the debtor for the balance of the debt. He is bound by the agreement under which he accepts a smaller account from the third party. In Hirachand Punamchand v Temple, it was a debt was discharged when the creditor accepted a smaller sum from the debtor’s father in full settlement.

See the key pillars of democracy

See the reasons for military intervention in Nigeria

History of the legal profession in Nigeria