Positive and Negative Impact of Globalization 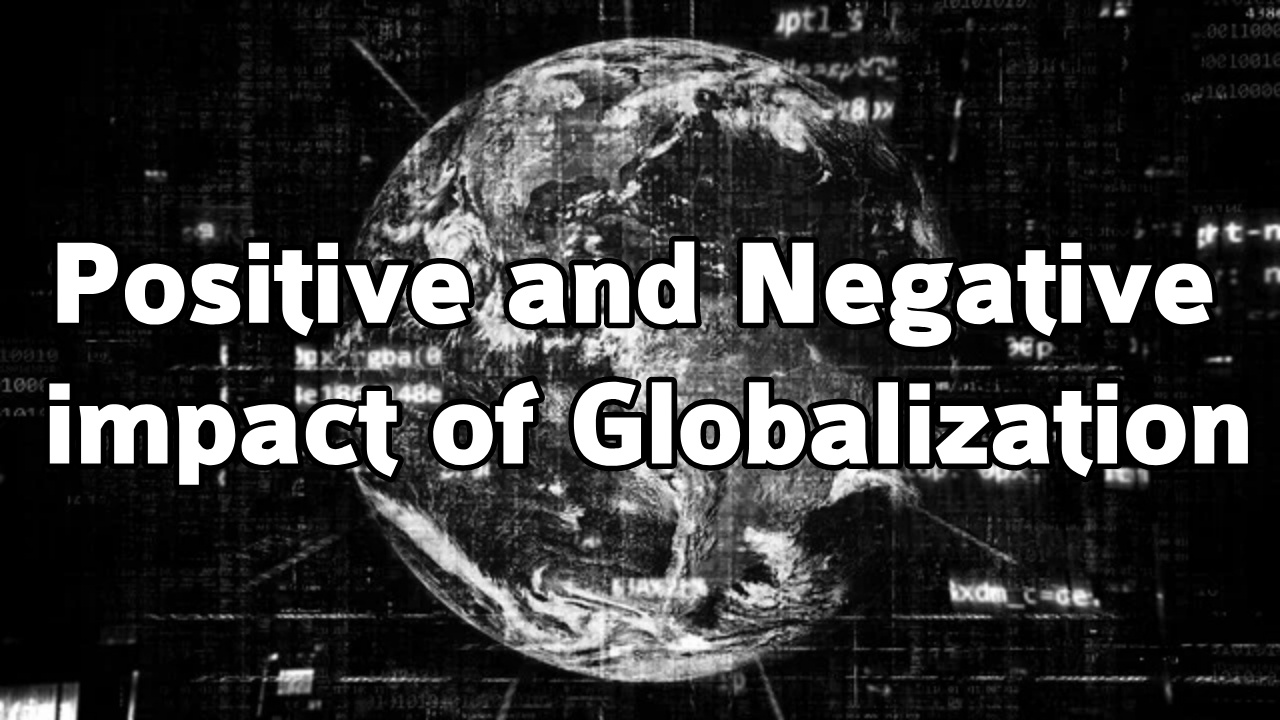 Positive and Negative Impact of Globalization: ‘No man is an island’ is a popular saying which is deeply rooted in the annals of human existence. Humans interact with each other. Interdependence between people is necessary as no one has it all. In all areas of human endeavors, be it in politics, economy or culture, interactions exist.

positive and negative impact of globalization

The interactions and interdependence of people, nay, nations on each other gave rise to globalization. Moreso, the advent of science and technology, the ever increasing innovative inventions, coupled with the desire of man to rule and conquer the universe are critical players in the globalization agenda of the human race.

Globalization is simply the process by which information, ideas, knowledge, goods and services are shared and accessed around the globe. It entails the process by which businesses and organizations attain international influence. The term came to be used due to the upsurge of services demanded globally with the advent of technology.

Prior to this time, the concept of globalization was limited to the provision of, and transportation of goods around the globe via merchant ships. The idea was limited to only economic movement of goods and services. However, with the growth and advancement in technology, globalization is no longer limited to economic activities but also affects cultures and political set ups of nations of the world.

Globalization acts as a meeting point of various cultural and economic systems. It bridges the gap between peoples. It has made the world a global village. The impacts of globalization (positive and negative alike) is the thrust of this write up which shall be discussed hereunder.

People have also learnt to be more tolerant of the culture of others as a result of the influence of globalization. Globalization therefore, serves as a means of bridging the cultural gap and differences which tore us apart. It has helped us to appreciate our similarities more while also educating us on the need to discard our differences.

2. Easy Access to New Markets, Goods and Services: With technological advancement, the internet has become a veritable tool in the marketing of goods and services. Businesses are gradually having online presence and can be accessed by a large variety of persons.

The implementation of free trade agreements by national governments has also made the physical movement of goods and services easier for the nationals of such countries. Again, goods and services can be gotten at cheaper rates as the cost of production has been greatly reduced by the impact of science and technology.

3. Globalization Creates Political Alliances: The interdependence of nations led to the creation of political alliances between different countries of the world. This is seen in the creation of Regional and Sub Regional bodies. These bodies ensure economic stability between member states. For example, the Free Trade arrangement within the ECOWAS sub region has created some sort of bond between the members of the body. Countries with common goal come together to establish alliances which help them achieve their aims, OPEC, being an example of such alliances.

The political alliances created by these countries encourage friendship and amity between their citizens. These alliances usually grant incentives to citizens of members states, for instance, the Free Visa Policy for citizens of ECOWAS member state. By this, the interactions and interdependence between countries deepens, all due to the effect of globalization.

4. Creation of Job and Employment Opportunities: Globalization creates job and employment opportunities. Markets are moving online and there is massive need for new talents and people with online competence to do these. The internet has a huge population coverage and businesses thrive on it. Also, young talented individuals can be employed and work comfortably from the comfort of their homes.

Away from the opportunities available on the internet, the movement and migration of multinational companies and business outlets have given job opportunities to persons where they have established physical presence.

Also read: Meaning and Functions of the Arms of government

1. Health Hazards: Globalization birthed the use of chemicals and other heavy metals to improve agriculture. Green house emissions and global warming are the direct consequences of this action. The depletion of the ozone layer by these gaseous emissions increases the risks of having health related issues.

Furthermore, the use of chemicals to grow foods just to meet up with the teeming world population has proven to be hazardous to human health as it has been proven that these chemical based foods are major causes of cancer and organ failures.

2. Globalization May Lead to Conflicts: Where there is a clash of interest among nations in a political Bloc, there may be conflict. Political Alliances may breakdown if the economic interest of a nation is threatened. For example, it is a widely held belief that the interest of the Western Powers in the resources of countries in Africa and the Middle East is the major cause of civil and political unrests in these countries.

Again, there are times when trade wars exist due to the interest of world powers. The Cold War (between Capitalist West and Socialist East), the USA-China trade wars, the closure of Nigeria’s borders with her West African neighbors, among other economic conflicts are examples of some of the conflicts that arose due to globalization.

Must read: Major Importance of Technology in Education

3. Globalization Causes Loss of Cultural Identity: Access to unrestricted information and interactions between people of various backgrounds have led to exchange of ideas and cultures. New ways of life are learnt. Cultures not amenable to modern times are discarded while reasonable ones are kept.

However, this interchange of cultural value leads to identity loss. Local languages are fast becoming extinct. Good values are also, sometimes discarded in the bid to flow with the trend. The new normal now is a world devoid of human values and sympathy. This list of cultural identity is one of the major negatives associated with globalization.

4. Loss of Job: The use of technology in modern times is a contributory factor in the loss of employment. Human workers are being laid off while computers or robots are purchased in their stead. With the loss of jobs, there is likely to be an increase in crime rate in the society.

The use of computers and machines by employers of labour is a major factor in the high rate of unemployment around the globe. Despite the fact that globalization creates jobs, it also causes unemployment and loss of jobs as only those skilled in the use of a particular technology are gainfully employed in today’s world.

Conclusively, globalization as it were, when employed positively is a boost to human relations and stability in the world. However, globalization becomes a curse to the world if used by persons, powers or nations for ulterior motives.