Factors that Limits Independence of the Judiciary in Nigeria

The Judiciary is the beacon of hope for the Common man and it is founded on the doctrine of Separation of Power which provides for division of Governmental powers between the Executive, Legislature and the Judiciary.

In the case of Ahmad v Sokoto State House of Assembly the Court restated that “The doctrine of Separation of Power has three implications: That the same persons should not be part of more than one of the three organs of Government, that one organ should not dominate or control the other, and that one organ of Government should not attempt and exercise the function of the other.”

The Constitution of the Federal Republic of Nigeria in Section 4, 5,6 distincts the functions of the Legislature, Executive and the Judiciary respectively and further provides in Section 17 (1) (e)  that “The independence, impartiality and integrity of Courts of Law and easy accessibility thereto shall be secured and maintained.”

However, in recent times eyebrows has been raised to Whether the Independence of the Judiciary has been truly maintained in Nigeria?  To proffer an answer to this, it is important to consider the features of an Independent Judiciary and Juxtapose whether the Nigerian Judiciary is truly Independent.

Ways of acquiring citizenship in Nigeria

Meaning of Independence of the Judiciary

It is worthy to note that the term Independence of the Judiciary has no precise definition, but it can be said to be “The ability of Courts and Judges to perform their duties free of influence or control by other actors, whether Governmental or private.” In a normative sense, it refers to the kind of Independence that Courts and Judges ought to possess.

Every Judiciary that is Independent has the following features: Security of tenure, Individual and institutional freedom from unwarranted interference with the Judicial process, proper remuneration of Judges, Financial Security and full responsibility of it’s process of appointing, promoting and removing Judicial officers.

In the current Nigerian Judicial dispensation, the remuneration, salaries and allowances of Judges are determined and paid by the revenue mobilization allocation and fiscal development. The Judiciary has no control over it’s finance and is dependent on revenue allocation from the Federation.

In the words of Hon. Justice Mariam Alomo, a former Chief Justice of the Federation “Statistics have shown that funding from the Federal Government has witnessed steady decline since 2010, from 95 Billion Naira in that year to 85BN in 2011, then 75BN and dropped again in the 2013 Budget to 63BN. Indeed, with this; if the amount allocated to the extra Judicial organizations within the Judiciary are deducted, the Courts are left with a paltry sum to operate.”

Flowing from the words of the former Chief Justice, it can be said that the Nigerian Judiciary lacks proper remuneration and Financial security.

The process of  Appointing and Removing Judicial officers is also at the discretion of the Executive arm of Government who either approves or declines a recommendation of the National Judicial Council.

This power basked on the Politicians to remove Judicial officers often leads to unwarranted interference with Judicial process and Lack of Security in the tenure of Judges. In 2011, President Goodluck Jonathan controversially suspended Justice Ayo Salami, the president of the Court of Appeal. More recently, President Buhari removed the immediate past Chief Judge of the Federation, Justice Walter Onnoghen without following due process.

These acts of indiscriminately removing Judicial officers is not limited at the Federal level, but is even more prevalent at the State Level and Judiciary. Hon. Justice Dahiru Mustapher, former Chief Justice of the Federation acknowledged this saying “It is regrettable that some State Chief executives treat the Judiciary as an appendage of the Executive arm.

The plight of the State Judiciaries is compounded by the fact that, inspite of the best efforts of the National Judicial Council, the processes of Appointment, Removal of Judges and Security of tenure is the subject of Political theatric.”

From the above analysis, it is safe to say that the Nigerian Judiciary lacks Independence. 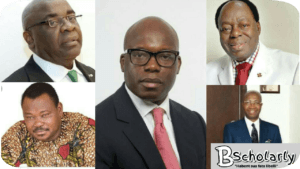 Independence of the judiciary in Nigeria

FACTORS LIMITS INDEPENDENCE OF THE JUDICIARY IN NIGERIA

While fingers may be pointed at a host of factors responsible for the lack of Independence in the Nigerian Judiciary, there are two major factors limiting the Independence of the Judiciary, they are: The loopholes in the provision of the 1999 Constitution and the failure of the National Judicial Council to live up to it’s expectations.

Let’s quickly examine these two factors and how they limit the Independence of the Judiciary.

Also see: Factors that limits rule of law in Nigeria

1. The Constitution of Nigeria

The Constitution is the basic Law of the land and has to be obeyed above every other Law in the Land. Sadly, this Constitution has loopholes which provides for extraneous interference from the Executive and Political elites with the affairs of the Judiciary.

Section 84(1) (2) 1999 CFRN provides “There shall be paid to the holders of the offices maintained in this section such remuneration, salaries and allowances as may be prescribed, but not exceeding the amount as shall have been determined by the revenue mobilization allocation and fiscal development.

The remuneration, salaries and allowances payable to the holders of the offices so mentioned shall be a charge upon the consolidated revenue fund of the federation.” Subsection (4) mentions the National Judicial Council and Judges as offices referred to in the Section.

The import of the above provision of the Constitution is that the funds of the Judiciary shall be determined and paid by the Consolidated revenue of the Federation and the Executive. Thus naturally limiting Judicial control over it’s remuneration and affecting the Financial security of Judges in the process.

The Constitution further provides for two methods of appointing Judges. The first method is appointment by the President or Governor acting on the advice of the National Judicial Council and subject to the confirmation by the Senate or State House of Assembly as the case may be.

The second method is appointment of Judges by the President or Governor acting on the recommendation of the National Judicial Council. The confirmation of either the Senate or State House of Assembly is not needed.

This Constitutional provision makes it the responsibility of the President or Governor of a State to appoint Judicial officers as they hold the discretion to either accept or reject the nomination of the National Judicial Council.

In addition, the Constitution provides for the removal of a Judge by the President or Governor upon approval of two thirds majority of the appropriate legislative house or on the recommendation of the appropriate Judicial service commission as the case may be.

This provision of the Constitution allows the Executive and the Legislature to interfere with the affair of removing a Judicial officer.

From the consideration of these provisions of the 1999 Constitution, it is clear that the Constitution not only limits Judicial control over Appointment, Removal and remuneration of Judges but it also limits it’s Financial control and Security of Tenure   which are essential ingredients of an Independent Judiciary.

Differences between Cross-offers and counter-offers

Differences between offer and invitation to treat

2. Inability of the National Judicial Council to live up to it’s expectation

Taking into account the loopholes in the 1999 Constitution, Section 153(1) (I) of the 1999 CFRN established the National Judicial Council with the responsibility of protecting the Judiciary from the whims and caprices of the Executive arm of Government.

However, despite the efforts of the NJC to maintain the independence of the Judiciary, the present constitutional provisions has worked against it thereby limiting it’s ability to live up to expectations.

Section 15(1) 1999 CFRN provides that the president has the power to appoint the chairman and members of the National Judicial Council. This appointment often breeds loyalty and makes the NJC a little more of an appendage of the Executive arm and restricts it’s ability to ensure the Independence of the Judiciary.

It was widely reported and alleged by the then President of the Court of Appeal Justice Salami that the Chief Justice of the Federation and Chairman of NJC, Justice Katsina- Alu was pressurizing him to rule in favour of PDP the ruling Party in the 2007 Sokoto Electoral tribunal matter.

This atom of corruption and loyalty in the NJC and the fact that the NJC is like a one man council has further not helped it to live up to it’s expectation of ensuring the Independence of the Nigerian Judiciary.

In Conclusion, I must restate that our current Constitutional provision acts as an impediment to the efforts of our Judiciary to attain Independence. To this effect, Constitutional and procedural amendments should be put in place to ensure the Independence of Judiciary.

This is because an independent Judiciary is the backbone of the existence of Rule of Law in Nigeria and the rights of the Nigerian Citizens enshrined in the Constitution has no worth, except guaranteed to them by an Independent and virtuous Judiciary.