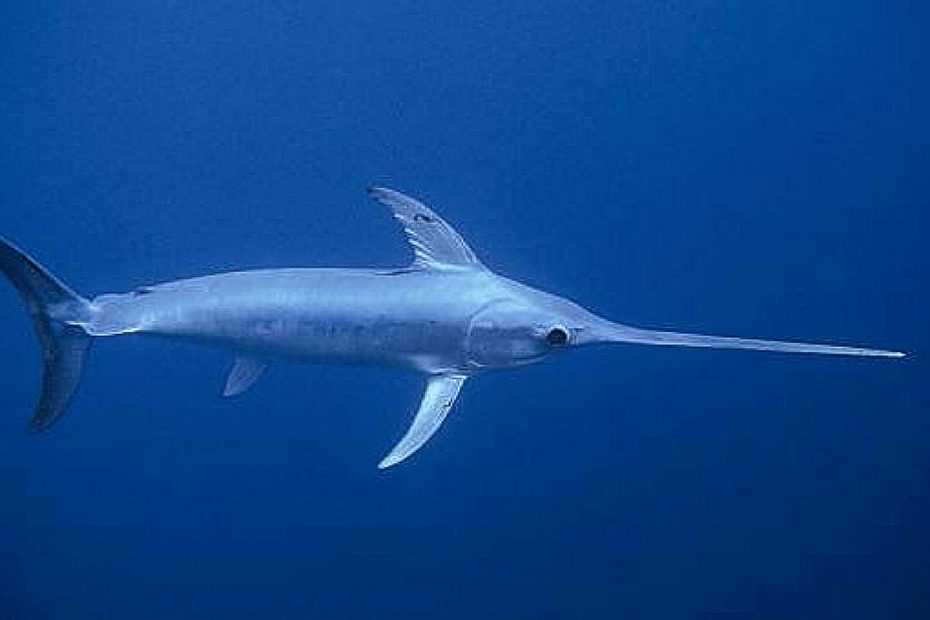 Fastest Animals In Water: It’s a remarkable reality that life exists in many forms in water, land, and air. They vary in size, speed, and have unique characteristics. The extraordinary metabolisms and refined musculature of the cheetah allow it to reach maximum speeds of at least 61 miles per hour and accelerate to that pace in under three seconds, making it the fastest mammal on land. Peregrine falcons, the fastest animal in the sky, may reach speeds of 240 miles per hour when diving for food in a condition of free fall.

In comparison, aquatic creatures appear to have a difficult time competing. Water’s increased density is enough of a barrier, but this animal kingdom continues to amaze, the fastest aquatic species have spent millions of years constructing aerodynamic and perfectly built bodies. Regardless of whether they’re the hunter or the presumptive supper, these creatures use a range of various modes of locomotion to get around in the water.

The following is a list of the fastest creatures in the water, organized by their relative speed in the water.

What Are The Fastest Aquatic Animals?

1. Marlin 68 mph (110 km/h): The Istiophoridae family of fish includes the marlin, which has a long body, a beak, and long fins that extend from the crust. The name derives from the fish’s similarity to a sailor’s marlinspike. With a top speed of 68 miles per hour, they are the fastest swimmers on the planet. 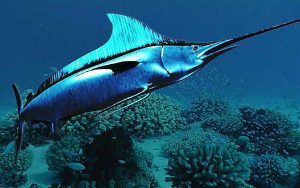 In tropical areas, marlin fish is a popular sport fish. They may reach a length of 7 meters and weigh up to 60 pounds. Some bigger species of the same group are the Atlantic blue marlin, Makaira Nigerians, black marlin, and Istiompax indica.

They pierce their prey with their long beak. The sailfish, a Marlin species, has an average speed of 68 miles per hour, making it the world’s fastest animal on the sea. They favor the upper reaches of the sea and may occasionally swim great distances to catch their food. These fish species migrate from colder tropical regions to warmer climates. Swordfish and Scombridae kinds are closely related to marlins.

2. Swordfish 60 mph (97 km/h): Swordfish has a pointed beak that may make up over half of their whole-body length and is an efficient hunting weapon. Rather than spearing prospective prey with its distinctive sword, the swordfish pursues and cuts its ocean prey to slow them down. Even without that lethal weapon, few fish species could keep up with this rapid fish, yet their extraordinary feeling of speed is attained by a strange evolutionary adaption. 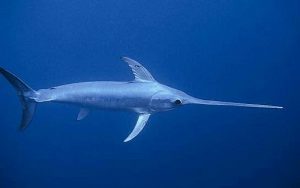 An oily material is extracted by a gland on the swordfish’s face, making them more hydrodynamic and adept hunters. That isn’t the only unusual adaptation on their face. Their eyes have organs that keep them warm while also increasing their eyesight. Apart from humans, swordfish have few predators because of their speed and ferocity. Their only reliable predators in the water are mako sharks and killer whales.

Recommended: Most dangerous dog breeds in the world: Top 10

3. Mahi-Mahi (57 mph): Mahi-mahi, which can be found in the Gulf of Mexico, the Caribbean Sea, and the Atlantic Ocean, may travel approximately 2,000 miles in a month because of their remarkable speed. These fish are not only fast swimmers, but they are also rapid growers. The average mahi-mahi may live for seven years, yet it only takes three months for them to reach sexual maturity. During this stage, they can grow up to 3 inches every week. 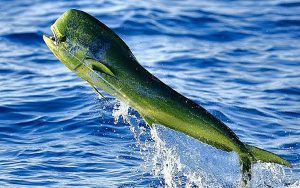 These gregarious fish not only use their speed to avoid predators, but they also use it to complete long mating voyages. Fortunately, despite being one of the most popular eating fish, the Mahi’s growth rates allow them to maintain healthy populations. Mahi-mahi, commonly known as the common dolphinfish, may reach a weight of up to 50 pounds.

4. Pilot Whale (47 mph): Pilot whales, like killer whales, are a dolphin species, and they are the second-largest dolphin species on the planet, immediately after orcas. However, despite the fact that these aquatic creatures may weigh up to 2,000 pounds, they employ their keen sense of acceleration for depth hunting. 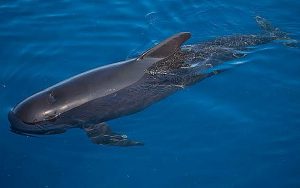 What animal is the fastest in the water

Pilot whales will dive almost 3,000 feet beneath the surface of the water in search of enormous squid, much like a falcon does for its prey. This is unusual for whales and dolphins that hunt in deep seas, as functioning at slower speeds conserves oxygen more effectively.

Recommended: Toughest Animals in the World 2022

5. Yellowfin Tuna – 74 km/h (46 mph): Yellowfin Tuna is related to Bonito, and there are bigger tuna species in both the north and south hemispheres. They live on the water’s surface and may reach a weight of 400 pounds in eight years. Most of the time, it travels at a pace of 46 miles per hour. This tuna’s biological design allows them to achieve this speed. 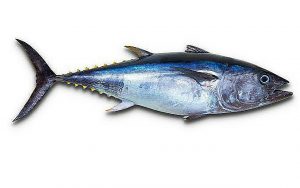 They can travel with the river thanks to their pectoral fins and unique grooves. They can swim faster because of these characteristics.

They consume all of the available things in their range, which contributes to their rapid weight gain. They eat other fish, squids, and other surface-dwelling creatures. Because of their proclivity for increasing weight, these tunas have become a target for fishermen.

6. Mako Shark – 46 mph (74 km/h): The Mako Shark, sometimes called the blue pointer shark, bonito shark, or shortfin mako shark is a larger mackerel shark. Among all shark species, they are the fastest. 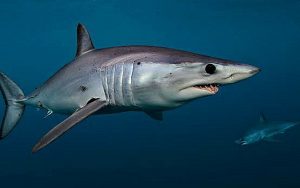 These creatures develop at a faster pace than adult sharks, and an adult shark may grow to be 3.2 meters long and weigh up to 135 kilograms. This species’ greatest confirmed length is around 4.45 meters.
They may be found in tropical oceans all around the world. Mako Sharks eat tuna, swordfish, bonitos, turtles, other sharks, and seabirds, among other things. With a confirmed peak speed of 40 miles per hour, this shark can attain a top speed of 46 miles per hour.

The International Shark Attack File has received reports of these sharks attacking persons and boats, with injuries resulting in death in certain cases. Although they have never been documented to prey on humans, their speed, strength, and size make them capable of attacking and killing humans.

7. Flying Fish – 43 mph (69 km/h): The fish was given its moniker because of its elusiveness to predators. 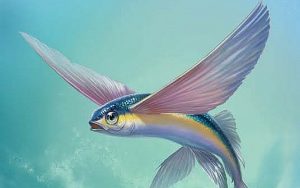 They can swim at a high speed of 43 miles per hour and have a peak glide time of thirty seconds. This is an endangered species in the water. They used to hunt at night. The mating season for these fishes is usually in the fall or spring. The fish looks to have a lifespan of five years.

The morphological changes that have occurred in these populations include wide neural arches, connective tissues, and finely organized ligaments. Because of all of these characteristics, they can move at peak speeds.

8. Bonito 40 mph (64 km/h): Bonitos are medium-sized fishes that belong to the Scombridae family, which also contain butterfly kingfish, mackerel, and tuna. Sardines are another name for them. This species appeared to leap at a rate of 40 miles per hour. Surprisingly, they can swim at a speed of roughly 30 miles per hour for long periods of time.

The Bonitos are actually scoring in terms of speed, but many other little fish species are lagging behind. Bonitos’ fast-twitch muscles aid in burst speed, but their slow-twitch muscles provide greater endurance.

9. Bonefish – 40 miles per hour (64 kilometers per hour): All around the world, it is the quickest fish in shallow bottom water.

The average size of a bonefish is 90 cm long and weighs roughly 8.6 grams. The hue of the bonefish is generally silvery black. They are found in tropical inshore waters and shallow mudflats. They have an air bladder in their abdomen that allows them to breathe while swimming.

These bonefish have a lifetime of around 19 years. Sharks and barracudas fish eat them often. To get away from predators, the fish has to be faster. A speed of 40 miles per hour has been reported by the fish.

Another characteristic of these swift species is that they congregate in small groups and maintain a safe distance from the closer fish. Bonefish is also known as banana fish, banana, and ladyfish, among other names.

The majority of people are unaware of the life that exists beneath the surface of the water. Animals may be found all over the world, and their primary goal is to survive. Life may be found on land, in the air, and in the deep sea. On our planet, there are several species with various traits. They vary in size, speed, and have unique characteristics.