Fastest Motorcycles In The World 2022 (With Pictures): Top 12 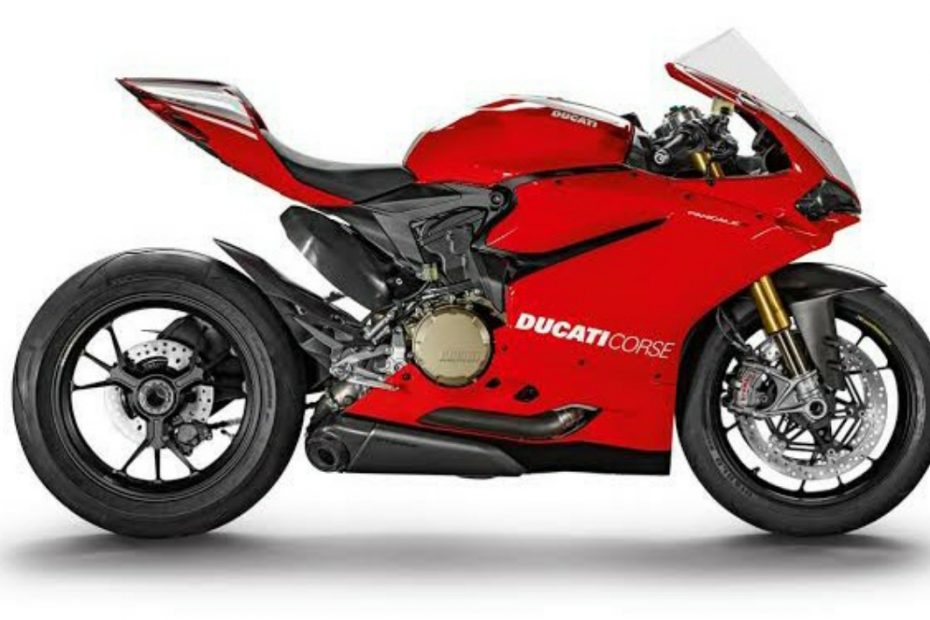 Fastest Motorcycles In The World: On two wheels, travelling quickly at dizzying speeds is not something for the timid. We would learn which motorcycle is the fastest in the world in this article. These motorcycles have reached the pinnacle of performance and have become household names, making them champions in their own right.

Some people continue to use conventional high-performance gasoline engines, while others favor contemporary electric motors with quick torque. One car, however, breaks all records with a Rolls Royce Allison turbine engine. The creation of the fastest motorcycles in the world required a lot of creativity.

The motorcycles on this list weren’t placed there by accident. It takes dedication to finish even close to first in the fastest motorcycle or vehicle events. Among them are some brands who were able to instantly become legendary, whilst the others had to strive for years before discovering the secret to top speed. If you wish to ride one of the world’s fastest motorcycles, hold on securely and keep an eye out for any dangers.

Recommended: Slowest Animals in the world 2022

12. BMW K1200S: 174 MPH: You know what to expect from the other bikes if the bike in position 12 is this quick. This motorcycle was expertly crafted by BMW to be both light and nimble. This motorcycle’s engine, which is its main source of propulsion, is a 1157 CC four-cylinder inline with an integrated transmission.

In order to maintain a low center of gravity, the engine is positioned diagonally. 3.2 seconds is all it takes for this bike to accelerate from 0 to 60 mph. This bicycle has really good brakes. What makes it so outstanding are its EVO brakes in combination with the partially integrated integral ABS from BMW Motorrad. 164 HP and 129 Nm of maximum torque are produced by the motorcycle at 10250 RPM and 8250 RPM, respectively.

11. BMW S1000RR: 188 mph: From as far back as 2009, the BMW S1000RR has been pushing the frontiers of capability. Everything was designed with the optimum riding experience in mind, as evidenced by the frame’s light weight and low-drag construction.

A top speed of 188 mph is possible with the S1000RR’s 205-horsepower inline-4 engine thanks to superb acceleration throughout the whole power curve. Fast enough to win many Isle of Man TT races and make whichever circuit it graces look good.

The motorcycle is obviously from the stables of BMW. The Power output is  205 horsepower and Maximum speed: 188 mph/303 km/h while the torque is 83 foot pounds. The website for BMW Motorcycles reveals more about this motorcycle.

10. Suzuki GSX1300 R Hayabusa: 194 mph
The Hayabusa’s market debut in 1999, with its record-breaking top speed of 194 mph, was a momentous occasion thanks to its tremendous power and all-around ability. 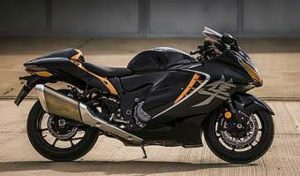 Suzuki found a way to handle the 197 horsepower engine while keeping the motorcycle one of the quickest in the world fun to ride on a regular basis. Who is to say that you can’t have it all?
It is produced by Suzuki, has 197 horsepower; top speed of 194 mph (312 km/h), torque of 139 ft pounds.

9. MV Agusta F4CC: 195 mph: The MV Agusta F4CC is a priceless piece of motorcycle history that was created with no expense spared. The managing director of MV Agusta, Claudio Castiglioni, decided to build a masterpiece by hand to compete for the title of best motorcycle in the world. Investment or price of the quickest bike in the world were unimportant. 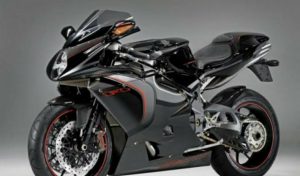 Fastest Motorcycles In The World currently

There are more than 90% custom parts in each of the 100 units created, including with titanium exhaust and carbon fiber fairings. The engine has numerous little tweaks, such as larger intake valves and modifications to the connecting rods’ shape.

A top-ten fastest motorcycle in the world is the MV Agusta F4CC. The Bugatti price list makes it seem reasonable in comparison, despite the fact that its $120,000 price tag is not low.

Also see: Most Beautiful Flowers in the world

8. Aprilia RSV4 1100 Factory: 199 mph
The Aprilia flagship model is an aggressive competitor. With a powerful V-4 engine producing 217 horsepower, the RSV4 1100 Factory is one of the fastest sportbikes in the world. A front hlins fork suspension is attached to an aluminum dual-beam chassis to guarantee exceptional road handling. 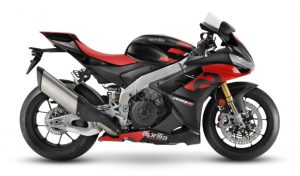 Which is the fastest motorcycle in the world?

It was produced by Aprilia.

7. Ducati Panigale V4 R: 199 mph: Anyone who is knowledgeable about the quickest production motorcycles is familiar with the name Ducati. Ducati has again demonstrated its capacity to juggle flair, sophistication, and performance when the new Panigale V4R reached a top speed of 199 mph. 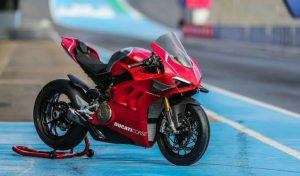 What is the fastest street bike in the world?

Ducati makes a similar street-legal Panigale model called the Ducati Superleggera V4 even though the V4R is only intended for usage on race tracks. Its unrivaled power-to-weight ratio of 1.54 horsepower per kilogram is its main selling point. The Ducati Superleggera V4’s top speed is electronically constrained to 186 mph (299 km/h), in accordance with the gentlemen’s agreement to cap mass-produced, street-legal motorcycles at 300 km/h.

Recommended: Countries With the Highest Life Expectancy In The World 2022

6. Damon Hypersport Pro: 200 mph: The best electric cars are sure to become more and more popular thanks to their powerful torque, growing ranges, and fashionable looks. The Damon Hypersport Pro satisfies these requirements with a 0 to 60 mph time of only 3 seconds, a 200-mile range, and a distinctive aesthetic. 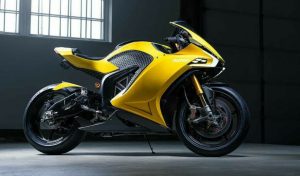 Which is the No 1 bike in the world?

Damon propels the Hypersport Pro to the top of the list of fastest bikes in the world with a top speed of 321 km/h (200 mph). Advanced safety measures, such as artificial intelligence that can detect disasters and help avoid them, balance this risk-taking attitude.

Damon is the maker. The following additional specifications are available: 200 mph (or 321 km/h) or higher peak speed; 200+ horsepower, >200 ft lbs of torque.

5. Ducati 1199 Panigale R: 202 mph: Even though the Panigale moniker is still present on a number of current Ducati models, the Ducati 1199 Panigale R is a distinct motorcycle from earlier Panigale models. Its two-cylinder engine, which also features titanium rods, a highly customized engine mapping, and a very light flywheel, generates 202 horsepower and a top speed of 202 mph. 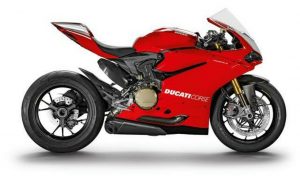 To achieve high-performance handling, a hlins suspension and an adjustable swingarm are used. It is among the top five fastest bikes in the world, exceeding all of your expectations for a Ducati.
Manufactured by Ducati this motorcycle is powered by 202 horses 100 foot pounds of torque at 202 mph/ 325 km/h top speed.

4. Lightning LS-218: 218 mph: The Lightning LS-218’s top speed of 218 mph and lightning-fast acceleration from 0 to 60 mph in just 2.2 seconds should dispel any last-minute skepticism about electric bikes. 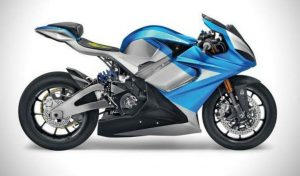 Hayabusa fastest bike in the world

The LS-218 is equipped with Bremo 4-piston brakes, an adjustable billet aluminum swingarm, and a Hline front suspension with full adjustment. Using a DC fast charger, the 150kw liquid-cooled IPW motor can be fully charged in around 30 minutes. It is simple to understand why it made our list of the top electric motorcycles. 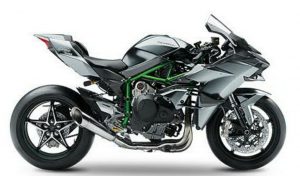 The creator is Kawasaki.

2. Kawasaki Ninja ZX-14R Supersport: 249 mph: Engineered for race, the Kawasaki Ninja ZX-14R Supersport sports a powerful 1,441cc inline-four engine that allows it to sprint down the strip at 249 mph, earning it the title “King of the Quarter Mile.”
Two power modes, a slipper clutch that restricts torque to the rear, and a monocoque aluminum frame are all features of the design. 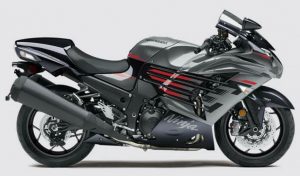 The bike’s ability to stop is ensured by Brembo 4-piston brakes and excellent onboard electronics, even after exceeding speed limits. The quick facts listed below regarding this motorcycle should be understood:

The engine can produce 326 horsepower.

The torque is 122 foot-pounds.

1. Dodge Tomahawk– TOP SPEED: 350 MPH: The Dodge Tomahawk, which can travel at speeds of up to 420 mph (676 km/h) while still retaining stability, resistance, and aerodynamics, is the world’s fastest motorbike. 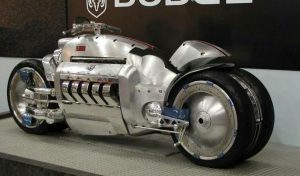 The Dodge Tomahawk has independent suspensions on each of its four wheels. The two-speed manual toe shift transmission on this bike uses the traditional chain and sprocket setup.
The 8.3-liter V10 Dodge Viper SRT10 powering this, the fastest motorcycle in the world, can generate 500 horsepower (370 kW) and 525 lb-ft (712 Nm) of torque at 5600 rpm.

Compared to other vehicles, the Dodge Tomahawk accelerates from 0 to 60 miles per hour in under 2.5 seconds, which is incredibly quick.

All nine Tomahawk units manufactured between 2003 and 2006 were sold by the well-known American chain of upscale department stores Neiman Marcus for about $550,000USD. The Dodge Tomahawk has no competitors as of this writing, however certain nations, including the United States, do not allow its use due to the bike’s four wheels and other issues.

Recommended: Differences Between Being Smart and Wise

There are many methods to build one of the quickest bikes in the world. While well-known racetrack brands like Ducati and Kawasaki cling to their core competencies, electric newcomers Lightning and Damon defy convention.
So there you have it—our list of some of the quickest bikes on the market. Keep in mind that safety is a consideration when moving quickly. With these motorcycles, you may experience the exhilaration of riding quickly and holding raw power in your hands. However, raise your guard and take precautions to keep yourself safe.

What if there is virtually no traffic where you are driving? Try not to use logic to get out of this. You will drive these motorcycles quickly since that is what they were designed for. Therefore, you will require your entire equipment. Although it doesn’t provide total safety, this has saved lives in the past and will do so in the future. In this case, it’s better to be cautious than sorry. Lastly, put on a helmet.