Home » Legal Articles » Meaning and Differences Between Equity and Equality

Meaning and Differences Between Equity and Equality 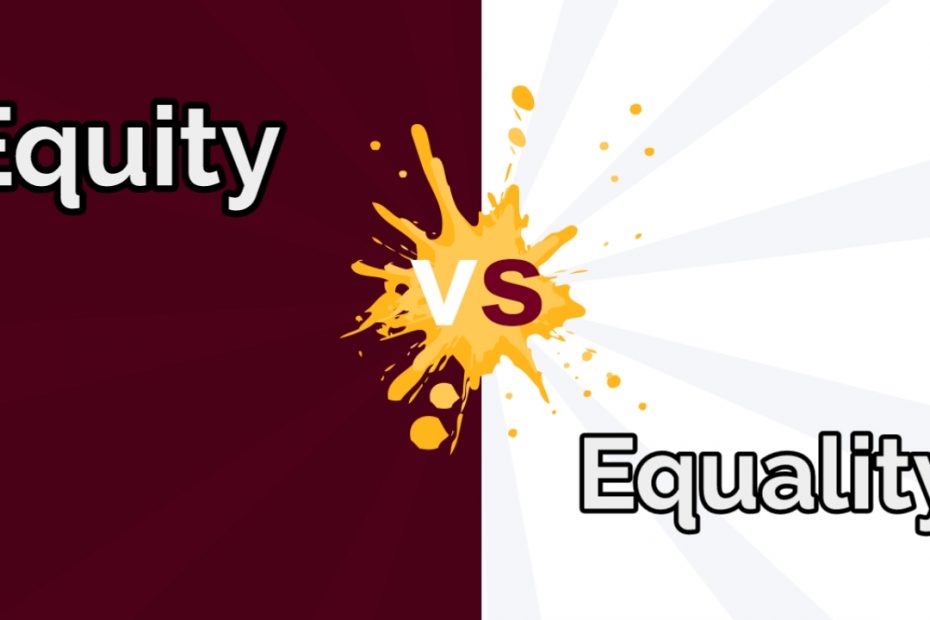 Meaning and Differences Between Equity and Equality: The ordinary meanings of Equality and Equity clearly depict that there is a similarity and on the other hand, there is a difference. The word “Equity” is defined as a state of being fair and impartial. It is the state of dealing fairly and equally with all concerned. Equality is the state of being equal in status, rights or opportunities regardless of circumstances. It means giving the same measure or treatment to everyone. Equity and Equality should be considered as two separate sides of the same coin.

In order to properly understand the difference between the two subjects, we must first of all identify the end of Equity and Equality. What is the purpose of showing equality or being equitable? The illustration below will help us know more about the concepts: 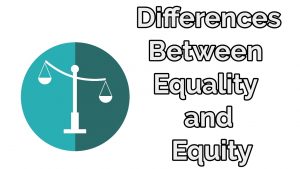 similarities and differences between a Equality and Equity

From the illustration above it is clear that the terms “Equality” and “Equity” cannot be used interchangeably. This is because Equality does not regard circumstances but only focuses on the same measure of privilege and status afforded to everyone. The philosophy behind Equality is that everyone deserves the same treatment irrespective of background, needs or orientation. Meanwhile, Equity looks at and observes the circumstances and gives to everyone accordingly in order to bring everyone to an equal level. Therefore, it is worth to conclude that the end or the purpose of Equity and Equality is Justice.

Depending on the arguments, there are cogent reasons to support one philosophical concept and oppose the other. It is needless to make continuous effort to argue over the two subjects because they are twin roads to Justice. Notwithstanding, it will be a nice touch to appreciate the notable differences between these two concepts of Justice.

Recommended: Meaning and Differences Between formal and informal letter

Differences Between Equity and Equality 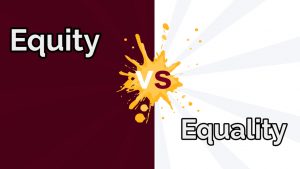 Meaning and Differences Between Equity and Equality

1. Equity means giving to everyone what they deserve while Equality is giving to everyone the same treatment: For Equality, regard of person or situation is absent and unimportant when making decisions or distributing resources. This is the opposite position of Equity. For those who are in support of the Equity theory, there are certain issues where this line of thought favours Equity.

For example,  in a matter of giving medical reliefs to the affected areas of wars or conflicts, if C area has more deprived individuals than D area by a large margin, it is only rational to provide C area with more of the reliefs than D area. This is the ideology behind Equity: Equity is Equality. In order to achieve a desirable outcome of satisfying the needs of everyone, one must act fairly and impartially in all situations.

However, equality brings everyone to the same basis with no reason for anybody to feel marginalized or mistreateed. Equity is about looking at things more broadly than a person who only cares about getting what others get. According to DeRay McKesson, equity is about giving to everyone what they deserve. Conventionally speaking, modern businesses, Government policies and even the Court Systems have leaned towards the concept of Equity seeing it as the closest thing to Justice.

2. Equity is interested in the needs and requirements of the individual while Equality focuses on equal opportunity to everyone: Equity is concerned with dealing with the needs of an individual fairly and impartially. It views circumstances narrowly and applies the principle of “Due reward“.

On the other hand, Equality is concerned with more than what an individual needs and concentrates on providing equal measures to everyone involved regardless of what anyone may need.

Recommended: Meaning and Differences Between criminal and civil law

For equality, it means that everyone will be treated at the same level causing no need for complaints, riots or conflicts which are the roots of inequality in any civil society. It can be argued that in some situations, the reverse is the case. When everyone is dealt with equally, it can be  understood that there is little or no concern for those with peculiar situations. Thus, it can be said that the philosophy of equality has a form of discrimination.

When it comes to equity, there is positive discrimination. In other words, it recognises the difference in individuals and situations treating them according to the right proportion whether it is in respect of age, gender, race, orientation and so on.

4. Injustice is on the high side when there is inequity rather than inequality: Justice can be viewed in many ways according to many people. But the true meaning of Justice is where everyone is accorded privileges, rights, opportunities and resources as they are due. Justice is based on the issue of what is right and what is wrong.

This is where the law of equity comes into effect. Therefore the absence of settling matters on an equitable scale is the best description of Injustice. This is not really the case with Inequality because it is dependent on the situation. Where there is no equality, it may or may not be Justice.

Also see: Exceptions to the rule in Rylands v Fletcher

5. Inequity is worse than inequality: Let us take for instance, the school authorities want to implement extra class lessons for the students. It is apparent that the reason for the suggestion of extra lessons is to place all students at the same level of merit and/or distinction in their academics. In that vein, there are students with higher grades and others who are underperforming in their studies.

In the spirit of equity, the weaker students should be afforded more time and better lectures than the students who are excelling. Equality prefers that all students should have the same quality of education notwithstanding the level of performance. It could become an issue when the focus of the lecturers will be centered on the outstanding students and lesser amount of attention will be given to those who desparately need it.

It is inequitable to invest the same amount of time and attention to those who are on a higher class. If there was inequality in this illustration, meaning that the excellent students are not given the same treatment, there will be no cause for alarm compared to a situation of education inequity.

Also see: Reasons why Lawyer Put On Wigs in Court

6. Equity embraces the reality of differences while Equality does not: It has become a topic of debate whether Government decisions and policies should be influenced by treating everyone the same or everyone differently albeit fairly. The advocates for equity believe that it is only logical to take the latter option because not all men are made the same way.

They believe that there are conditions of living that have put men on classes. That is why there is the rich and the poor, the educated and the illiterates, the developed and the undeveloped. It is therefore irrational for everyone to be treated the same way having noticed that these divisions exist.

7. Equity is Quality based while Equality is quantity based: Whenever a matter is resolved equitably or equally, the question is what was the reasoning behind the choice of settlement? On the side of Equity, it is evident that there is more concern on the quality of any decision or sharing of resources, e.tc.

The individual is not given what he or she wants but what he or she deserves. However for equality, it is all about giving everyone the same all in an effort to satisfy the needs of everyone.

8. Equity is determined by facts and circumstances while Equality is based on creational rights:  The problem with Equality has been repeatedly highlighted. Equity is not without its criticisms. How can we determine what is fair and just? Depending on your perspective, fairness may mean doing things equally or equitably.

Both ideas have their own version of what is fair, just and right. This is where the advocacy for Equity meets a challenge. Circumstances are different for everyone but in the end, life itself is dynamic. Situations can change at any given time and facts can be manipulated. This issue has been resolved by the principle of Equality which considers all men as equal to one  another and regardless of the evolution or development of humanity, it is self evident that all men are to be treated equally.

Judging matters on the basis of equity prevents a long term vision of what the situation may look like in years to come. Hence, if one should look at all issues equitably, there is the norm that all circumstances are as they are and neglecting that people can twist facts or manipulate circumstances just to get a higher benefit.

Also see: Facts, Issues and decision of the court in Donoghue v Stevenson

Truthfully, we can discuss for years about where the line is drawn between Equity and Equality. These concepts are appraised on a daily basis in all walks of life each having its pros and cons. There are policies, laws, decisions whether political, business related or personal that have been somewhat framed by these ideologies. Applying either will depend on the circumstances we encounter. If Justice is the end of all, then either Equity or Equality can function at the right situation.

As DeRay McKesson once intelligently quoted, Justice that is not rooted in equity in social welfare and in community is not Justice at all. Similarly, Evo Morales once said that “We all fight for freedom but the foundation of freedom is Equality and Justice”.  Whatever side one chooses to advocate for, the right perspective is that whatever you do especially when it involves other people, let Justice be achieved.

According to the astute writers and speakers, that can be achieved one way and the other. On that note, it remains to be seen if these philosophies can be flawlessly implemented. In the end, we may come to realize that sometimes, Equity is Equality and Equality is Equity.