Exceptions to the Rule in Rylands v Fletcher 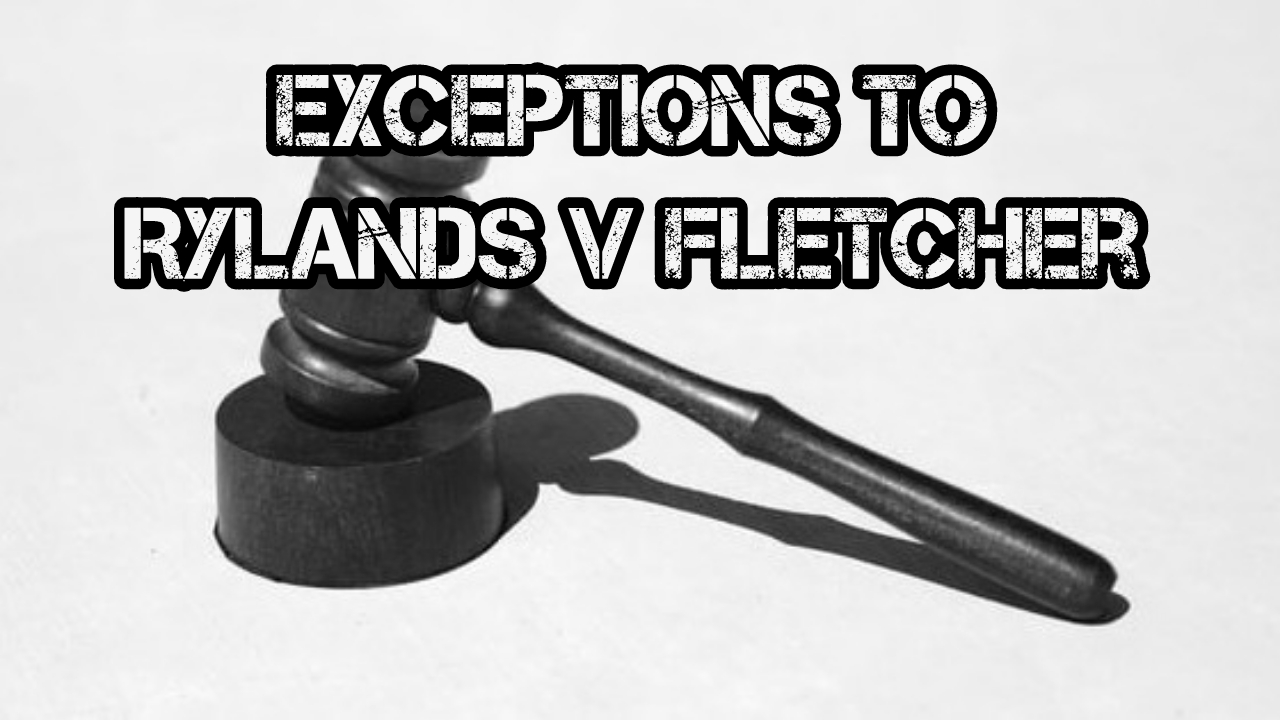 The rule is sometimes similar to Nuisance although then, it would not be restricted by some of the necessary features in Rylands v Fletcher. 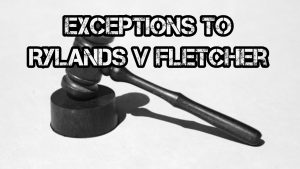 exceptions to the rule in Rylands v Fletcher

RECOMMENDED: Exceptions to the rule in Adams v Lindsell

The Facts of Rylands v. Fletcher

Rylands v Fletcher [1868] UKHL 1 was a decision by the House of Lords. Rylands employed contractors to build a reservoir, playing no active role in its construction. When the contractors discovered a series of old coal shafts improperly filled with debris, they chose to continue work rather than properly block them up. The result was that on 11 December 1860, shortly after being filled for the first time, Rylands’ reservoir burst and flooded a neighbouring mine, run by Fletcher, causing £937 worth of damage. Fletcher brought a claim under negligence against Rylands, through which the case eventually went to the Exchequer of Pleas.

The majority ruled in favour of Rylands. Bramwell B, however, dissenting, argued that the claimant had the right to enjoy his land free of interference from water, and that as a result, the defendant was guilty of trespass and the commissioning of a nuisance.

Bramwell’s argument was affirmed, both by the Court of Exchequer Chamber and the House of Lords, leading to the development of the “Rule in Rylands v Fletcher”; that “the person who for his own purposes brings on his lands and collects and keeps there anything likely to do mischief if it escapes, must keep it in at his peril, and, if he does not do so, is prima facie answerable for all the damage which is the natural consequence of its escape”.

The rule in Rylands v Fletcher

The rule states that, any person who in the course of non-natural use of his land accumulates thereon, for his own purpose, anything likely to do mischief if it escapes, is liable for all the direct damage or interference with the use of the land of another which results from the escape of the thing from his land. The rationale for this is that, a person who for his own purposes brings on his land and collects and keeps anything likely to do mischief if it escapes, “must keep it at his own peril”.

The rule applies to the escape of so many things like water (as in the present case), electricity, gas, fire, oil spillage, industrial waste water, garbage, animal, chemical, sewage and such other thing that may escape from the custody of property of the keeper and cause harm to someone else.

And the damages that a person can recover under the rule are:

a. Damages for physical harm to the land.

b. Damages to any structure or property on the land and;

c. Damages for personal injury to the person.

If you wish to get a deeper understanding of the case of Rylands v Fletcher, I highly recommend you to watch the video below. It gives you more detailed explanation.

The elements of the rule in Rylands v Fletcher

The following elements are necessary in establishing the rule in Rylands v. Fletcher and they are:

a. The defendant must occupy or own a land upon which he controls things.

b. The defendant must bring, collect or keep in his land at his peril, something which is dangerous and might cause mischief upon it’s escape.

c. There has to be an actual escape of the thing from the defendant’s land and entrance on the plaintiff’s land.

d. There must be a non natural use of the land.

e. There must be damage which has occurred as a result of the escape and

f. There must be liability for the natural consequences of the escape.

Facts summary of the case of Rylands v Fletcher

MUST READ: Types of Judicial evidence in Law

The exceptions to the rule in Rylands v. Fletcher

The exceptions to the rule in Rylands v Fletcher may also be seen as the defences available to a defendant when an action is brought against him under the rule and the defences against liability are so many and potent  that it has been argued that they may have robbed the principle of its vitality.

1. Statutory Authority: public authorities may escape liability under the rule in Rylands v. Fletcher when relying on the statutory authority immunity conferred on them by statutes. They may accumulate any of the non natural things listed above which may cause damage but will not be held liable for its escape as far as such public authority was not negligent in the discharge of its duties such as to lead to the escape and subsequent damage.

This was the situation in the case of Green v Chelsea Waterworks Co., (1894) 70 L. T. 547. The defendant waterworks was authorized by Parliament to lay water mains for the supply of water to the town of Chelsea in England and it was held by the court that, the water corporation was not liable since there was no negligence on their part.

2. Contributory negligence: Here a defendant may plead that the plaintiff also had faults.which resulted in his injury and not just the defendant’s acts, hence the defendant will only receive blame to the point where he is at fault.

3. Act of God: act of God simply refers to natural causes, situations which are beyond human foresight or preempting. And under such situations, the plaintiff cannot be liable. In Nichols v Marsland, (1876) 2 Ex. D. I.,  the defendant made an artificial lake by damming up a natural stream, an extraordinary rainfall occurred which caused the collapse of the artificial lake and the rush of water from it destroyed four nearby bridges. The defendant was not negligent and could not be held for an extraordinary act of God (nature).

4. Act of a Stranger or third party: the rule in Rylands v Fletcher will not apply where the escape of the thing which caused the damage occured by the deliberate and independent act of a third party over whom the defendant has no control. This was the case in Rickards v Lothian (1913) AC 263, (1911-13) All ER 71. The defendant was held not liable where a third party turned on the tap and deliberately blocked up the water pipe of a wash basin which caused flood on the plaintiff’s premises.

5. Consent of the plaintiff: where the plaintiff expressly or impliedly consent to the bringing, accumulation, or existence of the thing which escaped to cause the damage on the land of the defendant, he cannot be heard to complain later.

It is also a consideration under this head that, where the accumulation of the substance is for the benefit of both the plaintiff and defendant, there is implied consent by the plaintiff as seen in, Peters v Prince of Wales Theatres Ltd, (1943) KB 73, A G, the theatre company leased a shop in their theatre to the plaintiff who was informed that the theatre, including his shop had a water sprinkler system installed against fire. Water escaped during a frost and damaged his goods. He went ahead to sue the company but the defendant was held not liable as the sprinkler system was installed for their mutual benefit.

6. Fault of the plaintiff: the rule will not apply where the damage was caused entirely by the act of the plaintiff i.e, where the plaintiff is responsible for the escape of the harmful thing, he has no cause of action. In Ponting v Noakes, (1984) 2 K. B. 281. The plaintiff’s horse died after crossing to the defendant’s boundary and eating a poisonous tree. The court held that the plaintiff cannot recover damages.

Conclusion: In conclusion, for every law that exists there are exceptions and the rule in Rylands v Fletcher is no different. It is also known that to master the workings of a rule and make it work for you rather than against you, there is a need to master the exceptions and these have been given us above. Therefore, whenever a situation comes up before you under this rule,  it is necessary to go through the various exceptions and get to see which will avail you.