Nigerian Cases On Frustration Of Contract 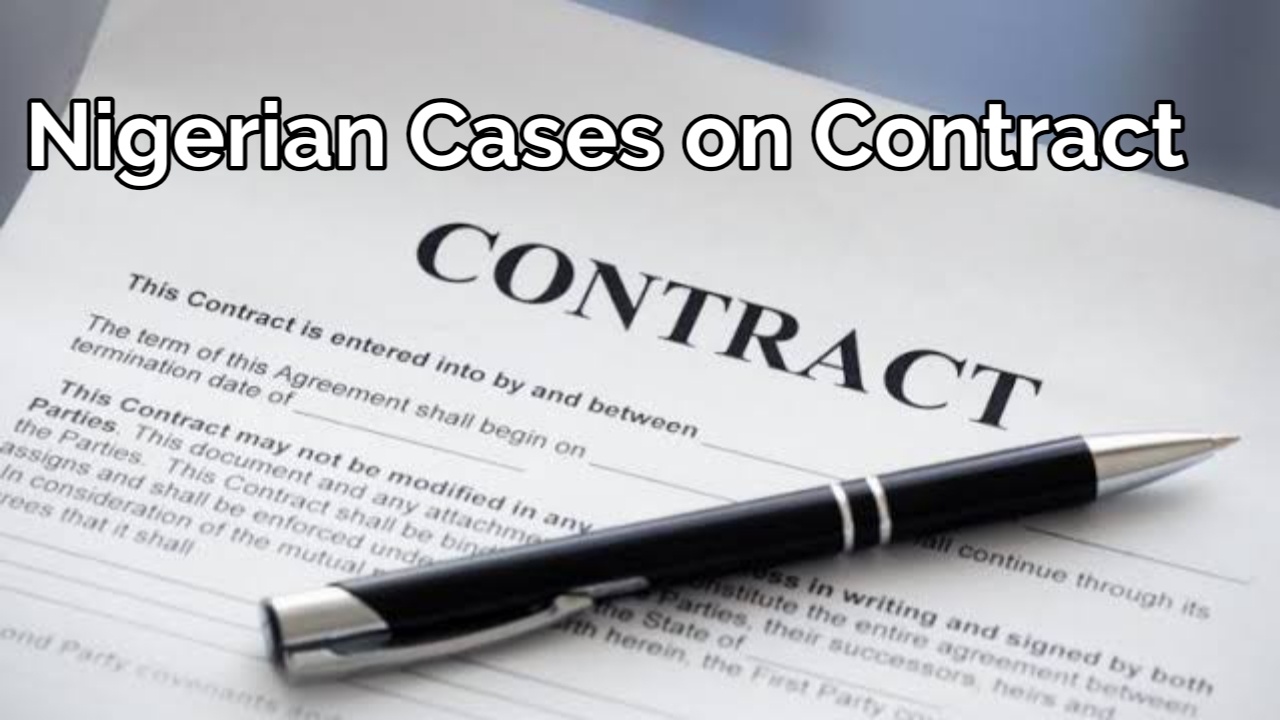 Nigerian cases on frustration of contract: It has come to my notice that many Nigerian lawyers find it very difficult to search for cases in law reports because of how voluminous and juxtaposed law reports are. For this reason, i thought it wise to make a comprehensive compilation of Nigerian cases in every area of law. Evidently, this will help Nigerian law students in their studies; and also help to foster justice in Nigeria’s legal system. So, without wasting much of your time, below is a compilation of some of the known Nigerian cases on frustration of contract. 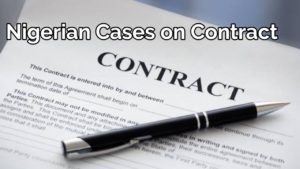 Nigerian cases on frustration of contract

It is worthwhile to note that i will not only mention the cases in this area of law. After mentioning any case, i will provide the citation and summary of the facts of the case. This will help you locate exactly what you are searching for in this page. Here we go!

What is frustration of contract

The world “frustration” is used to denote situations where an agreement has been terminated by supervening events beyond the control of the parties. Frustration of contract means that parties to a contract are excused from further performance of their obligations if some unexpected events occurs during the existence of the contract, without the fault of either party; and the event makes further performance of the contract impossible, illegal or makes the contract something radically different from what was originally undertaken by the parties.

Now, here are some of the celebrated Nigerian cases on frustration of contract:

Also read: Do you know why lawyers are called liars? Find out here!

Apparently, this is one of the famous Nigerian cases on frustration of contract. In the above case, the appellant had ordered a special type of aluminium roofing sheet from the respondent, which to the knowledge of the appellant was not available in Nigeria, and the respondent was therefore, to order it from Belgium. The respondent would also need to apply to the Central Bank for foreign exchange with which to effect the order.

Another celebrated Nigerian case on frustration of contract is the case of AG Cross River State v AG Federation. In this case, the president of the federal republic of Nigeria had in 2006 brokered an agreement between the federal government of Nigeria and the Government of Rivers state, Cross River State and Akwa Ibom state by which 76 oil wells in the Atlantic Ocean within the maritime territory of Nigeria would be attributable to Cross River state for the purpose of entitling it to 13% of revenue accruing to the federal account from offshore oil wells. Entitlement to this revenue was on the basis of the state being a littoral state.

Consequently, the Revenue Mobilization Allocation and Fiscal Commission omitted Cross River state from its list of states entitled to 13% of revenue accruing from offshore oil wells. Aggrieved by this act, Cross River State instituted action at the Supreme Court, seeking to enforce the 2006 agreement by which it was entitled to 13% of revenue accruing from the 76 oil wells.

The Supreme Court considered that the 2006 agreement had contemplated the retention by Nigeria of the western part of the Bakassi Peninsula and held that the contract had been frustrated by impossibility of performance and the parties thereby discharged.

Fundamental human rights in the 1999 constitution of Nigeria here

This is one of the Nigerian cases that explains frustration of contract as a result of war. In this case, the plaintiff brought an action against the defendant for arrears of salary and repatriation expenses from Lagos to Kano. The plaintiff had been employed by the defendant in 1957 as a clerk in their Kano branch. He entered into a service agreement under which he made a deposit of €100 (N200) to the defendants. This amount steadily increased until it stood at €261.61 on 1 October 1966. In 1958, he was transferred to Lagos as a storekeeper on a salary of €40 per month. In July 1966, he was transferred to Port Harcourt. On 1 July 1967, owing to the activities the Biafran force in the former Eastern Nigeria, the defendant moved their business to Aba.

In 1968, after the recapture of Port Harcourt by the Nigerian Federal forces from Biafran forces, the plaintiff found his way to Lagos and reported his arrival at the headquarters of the defendant and claimed his salary from July 1967 to the date of his arrival in Lagos. The defendant contended since the parties have lost touch completely as a result of the Civil war, the contract of employment between them had been frustrated.

The court held that due to the civil war and blockage of the former Eastern Region, the plaintiff was cut from his employer from June 1967 to September 1968, which meant that for more than 12 months, his employer had no continuous relationship with him. Indeed, this case explains frustration of contract through war.

The case of Ajuna Uche Johnson v UAC is another popular Nigerian case on frustration of contract. In this case, the plaintiff was employed as the manager of a subsidiary company of the defendant company. The contract of employment provided that the company was entitled to terminate the plaintiff’s employment by a two month notice or by two months’ salary in liue of notice.

Sometime in 1967, the plaintiff left Lagos for his home in the Eastern region and whilst he was there, the Civil war broke out, He was therefore unable to return to Lagos. Instead, he reported to another company which was also a subsidiary of the defendant company in Port Harcourt, then under the control of the Biafran Government, claiming to have been reabsorbed and paid his salary up till December 1969. There was no breach of his own company in Port Harcourt and the defendant company was not aware of his activities in Port Harcourt.

At the end of the war in 1970, the plaintiff wrote to his company in Lagos asking for a reposting to Lagos, and was informed that his appointment had been terminated since 1967. He was then paid two months salary in lieu of notice. He brought an action claiming he was still in the employment of the defendant company and was therefore entitled to 10 years’ salary, the period he was still to serve before being due for retirement.

The defendant contended that the contract had become frustrated by the Civil War which made performance not impossible. This position was upheld in the court.

Apparently, the case of Bentworth Finance (Nig) Ltd v Alhaji Sanni Bakori is another Nigerian case on frustration of contract as a result of the destruction of the subject matter. In this case, the defendant obtained a lorry from the plaintiff under hire-purchase agreement for the sum of €5,428 1d (N10,856.10) payable in 18 monthly installments. The plaintiff claimed the sum of €1,574 10s 0d as balance of rentals and related charges from the defendant because they claimed that the defendant was in default of payment, and thereby terminated the contract.

The court held that it was a rule of common law, if parties are unable to perform the contract on account of forces beyond their control, the contract shall terminate forthwith and the parties discharged.

In Mrs Abosede Dauda v Lagos Building Investment Co Ltd & 3 Ors, the respondent had sought to justify the refusal to honor a contract to allocate two bedroom bungalow to the appellant under their Jubilee Housing Scheme on the grounds that the housing project was frustrated because the government that conceived it was overthrown in 1993 by a military coup.

However, evidence on the record showed that the coup referred to by the respondent took place in 1993, while the appellant’s application for allocation of the two-bedroom apartment was made on 7th November, 1995. Therefore, there was no way the subsequent allocation to her could have been frustrated by the coup of 1993.

Must read: See the best lawyers in Nigeria this 2019

Western Nigeria Finance Corporations v West Cost Builders Ltd is also an interesting Nigerian case on frustration of contract or breach of contract by frustration. In the above case, the plaintiff corporation made a loan of €20,000 to the defendant contractor in 1961, on the understanding that the loan was to be repaid in seven months, after the execution of a road building contract awarded the defendant by the Western Nigeria Ministry of Works. The contract was supposed to be executed within seven months by April 1962. When by August 1962, four months after the deadline, the defendant had still not completed the work, the Ministry cancelled the contract.

In African Continental Bank Ltd v Francis Emo Omo, the facts which are in pari materia with the Western Nigerian Finance Corporation case above, the defendant also pleaded frustration when sued for the recovery of a loan from the fee of a contract he was earlier executing for the Mid Western State Ministry of Works, but that this had been terminated by the ministry.

Evidence before the court disclose that the contract had been terminated because of the defendant’s failure to complete it within the stipulated time. Again, it was held that the defendant could not invoke frustration to protect himself against the consequences of his own default.

It is not possible to give a complete list of different events which could amount to frustration in contract. In Nwaolisah v Nwabufoh Adekeye JSC set out examples of when a contract is frustrated which are by no means exhaustive:

Okay! Those are some of the popular Nigerian cases on frustration of contract. If this was helpful kindly send your comments below this post. Meanwhile, if you have any question you want to ask or contribution you want to make on this topic, kindly send them to us using the comment section.