Richest Lawyers in India and their Networth 2022: Top 11 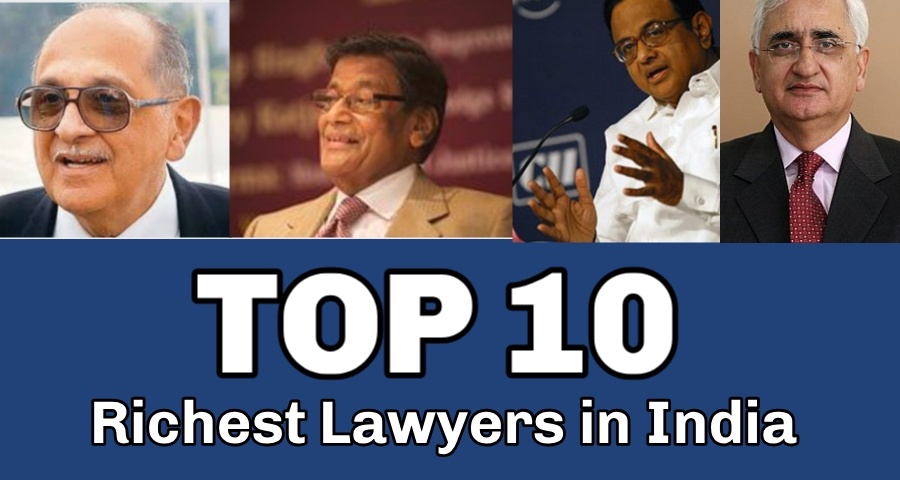 Richest Lawyers in India 2021: Law is apparently one of the most prestigious professions in India. Even till today, many students in India are studying very hard to make their dreams of becoming lawyers come true.

Nonetheless, there is this speculation that lawyers don’t really earn much in India. This proposition has been supported by many authors, but i don’t think it is totally true.

Trust me; there are many lawyers in India that earn even more than people in the entertainment industry. Today, i will show you some of the top richest lawyers in India you probably do not know before now.

This will disprove the false belief that the legal profession in India is not very lucrative. Coupled with that, it will encourage young students and lawyers in India to keep working hard in their different fields.

I enjoin you to read this work painstakingly as I mention and discuss the top richest lawyers in India this 2020. Here we go!

Below are the wealthiest legal practitioners in India and their estimated appearance fee:

I therefore enjoin you to continue reading as I will tell you more about the lawyers mentioned above. If you really want to know those lawyers, make sure you read this work till the end. 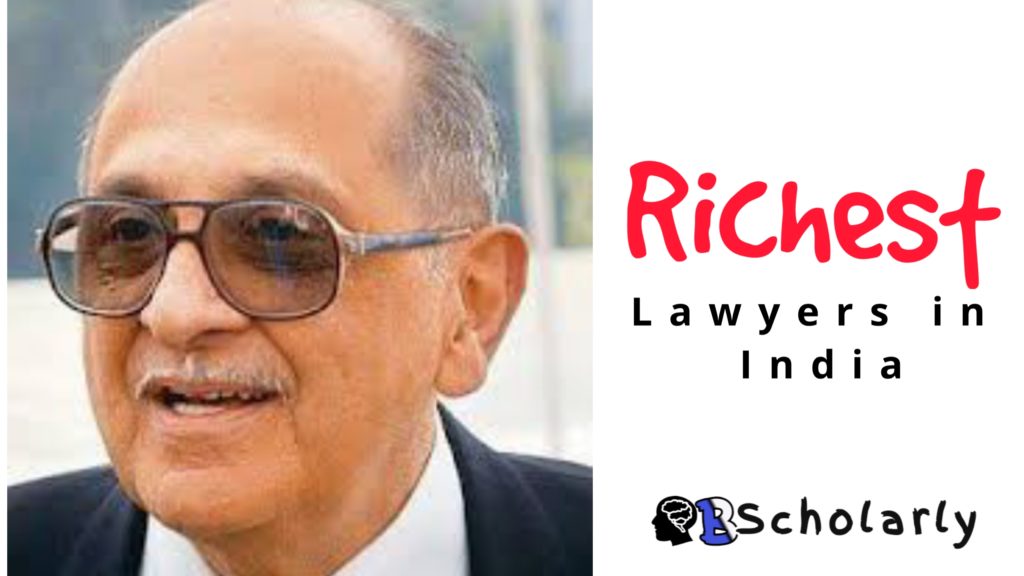 Undoubtedly, Fali Sam Nariman is one of the best and most prominent lawyers in India. He is also a well known Senior Advocate and jurist of the Supreme Court of India. When it comes to matters that concerns constitutional law in India, Fali Sam Nariman is a guru. In fact, he has become and authority in that field.

Due to his dedication to the legal profession, Fali Sam Nariman was honored with the 19th Lal Bahadur Shastri National Award for Excellence in Public Administration 2018. Aside from that particular award, Nariman has won other prestigious awards from different organizations. All these things made him more popular and powerful in India.

Accordingly to Wikipedia, Fali Sam Nariman studied at Government Law College, Mumbai in, 1950, where he obtained his Law degree (LL.B.). He practiced for 22 at the Bombay High Court before he was made a Senior Advocate.

There are many other things about Fali that I may not explain today, but if you really want to know more about this power lawyer, kindly check his autobiography titled “Before Memory Fades”.

Trust me; you will even learn more about the legal profession by reading that book. 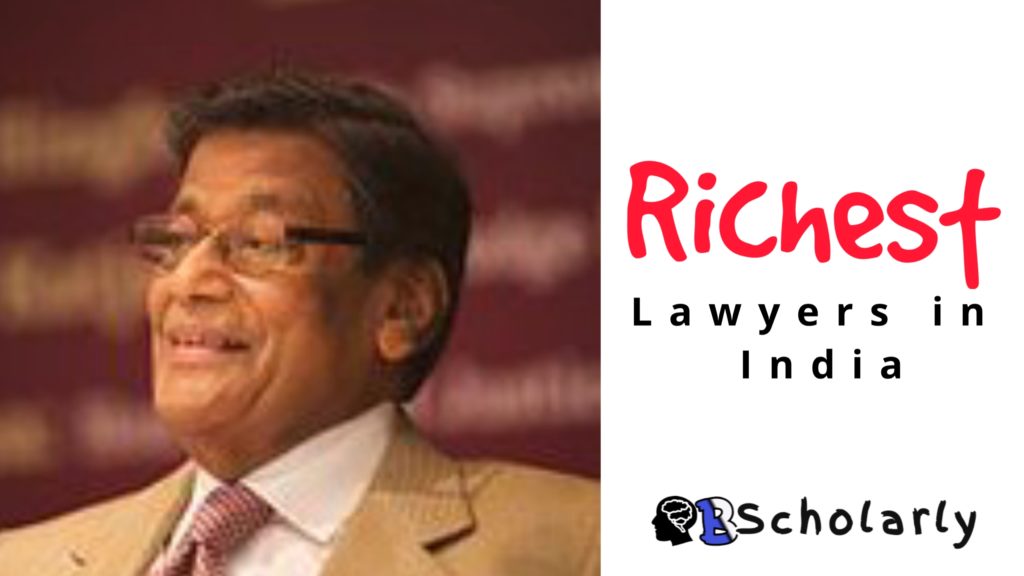 It will surprise you to know that Venugopal’s father was also a well-known Barrister in India. This could be the reason why Kottayan Katankot Venugopal is doing very well in the legal profession.

Accordingly to Wikipedia, Kottayan Katankot Venugopal was conferred the Padma Vibhushan award by Government of India around 2000. In case you do not know what that award is; it is actually the second-highest civilian honour in India. This should tell you how prestigious he is in India.

Currently, he is the attorney General of india. No doubt, Kottayan Katankot Venugopal is one of the richest lawyers in India. 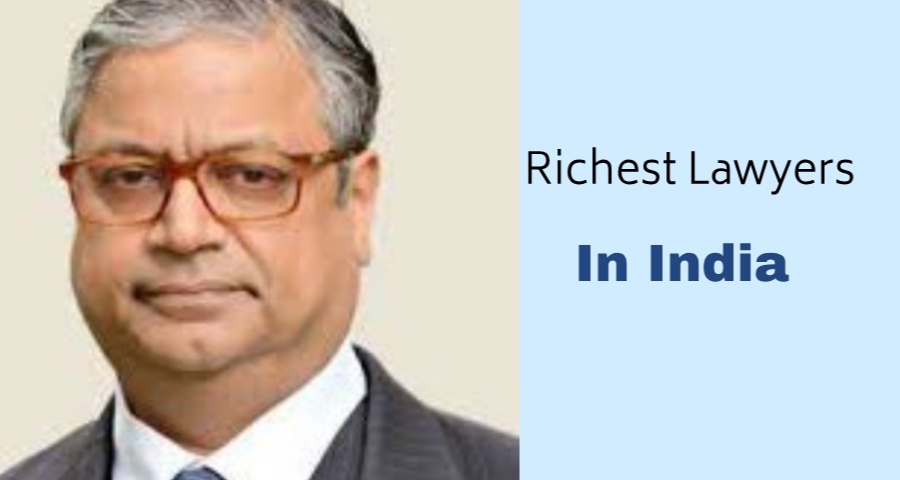 how much are lawyers paid in India?

Even though he is about 62 years currently, he is still contributing to the legal profession of his country. In 2009, Gopal Subramaniam was given the National Law Day Award for Outstanding Jurist, by the President of India himself.

This shows that Gopal Subramaniam is a respected lawyer. His appearance fee ranges from Rs. 5.5 – 15 lakh.

Surprisingly, Gopal Subramaniam actually attended Delhi University. He is undoubtedly one of the wealthiest lawyers in India currently. 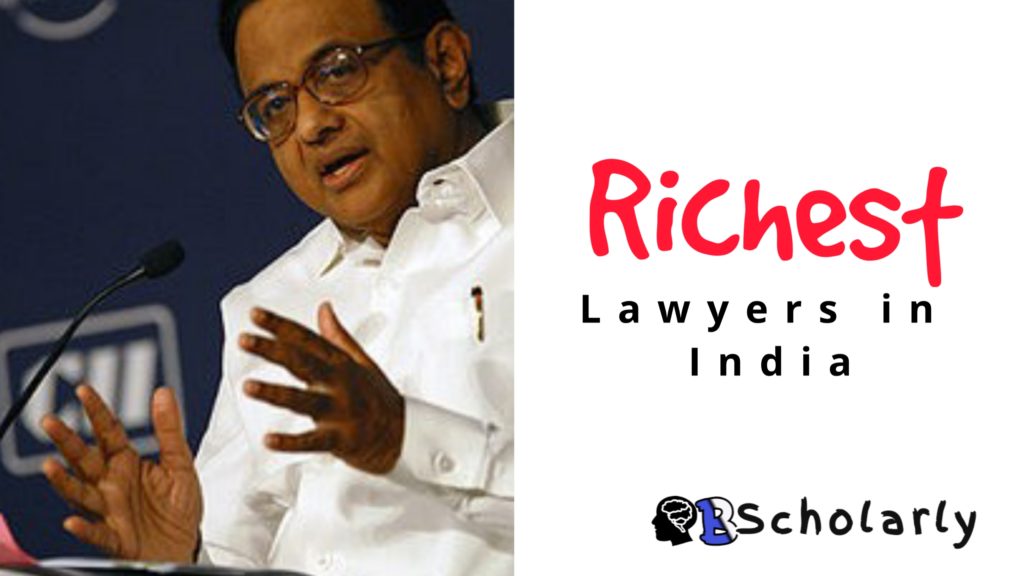 Palaniappan Chidambaram is a prominent lawyer and politician in India. He is a member of the Indian National Congress, a one time Prime Minister, Attorney, minister of finance and a member of the Parliament in India.

No doubt, Palaniappan Chidambaram (Popularly known as P. Chidambaram) is one of the richest and powerful lawyers in India currently. He studied at the University of Madras and Harvard University (One of the Best law faculties in the world).

In India, Palaniappan Chidambaram is one of the people that has really contributed to the growth and development of his country in so many ways. One of his outstanding books I have read is; “A View from the Outside”. This book really touched my life and I learned a lot from it.

Obviously, Palaniappan Chidambaram’s wealth is not solely from the legal profession. Nonetheless, it is apparent that he is one of the most expensive and highest paid lawyers in India currently.

MUST READ: Best education websites and blogs for Indian students 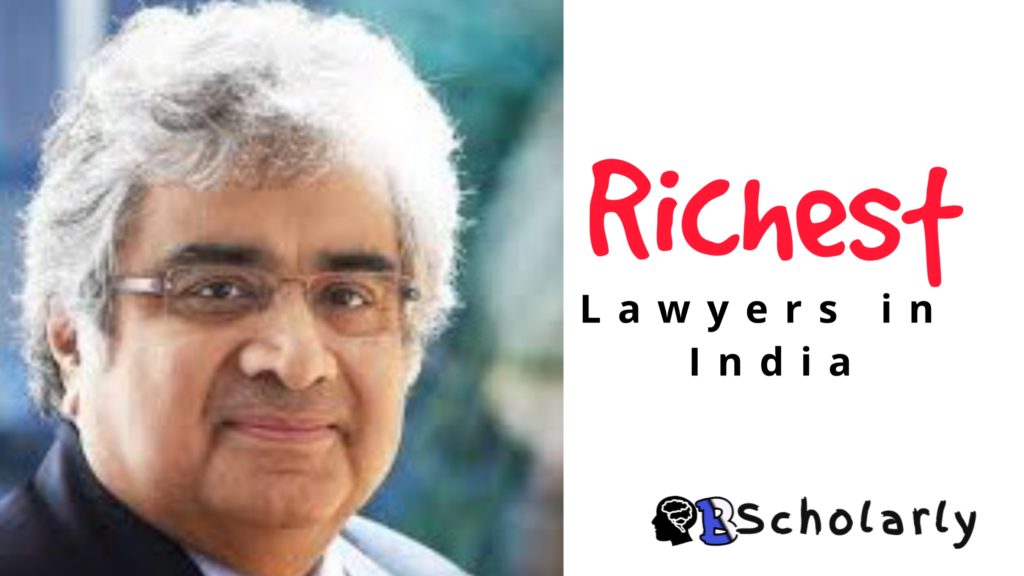 who is the richest lawyer in India?

Harish Salve is also one of the wealthiest Lawyers in India according to my research. He is a very popular and respected legal practitioner because he served as the Solicitor General of India from the 1st of November 1999 to the 3rd of November 2002. Even till today, Harish Salve is till practicing law.

In India, Harish Salve is an authority in different areas of law. He has handled different Supreme Court Cases in India and that is why many young lawyers and law students take him as their mentor. Currently, his appearance fee for any court case is nothing less than Rs. 6-15 lakh.

In an interview where he explained why he was designated a Senior Counsel by the Delhi High Court, Harish Salve told young lawyers that the secret to become a successful lawyer is to work hard.

Undoubtedly, i also emphasized this point in my article on how to become a successful lawyer here.

Also see: Reasons why democracy is the best form of government 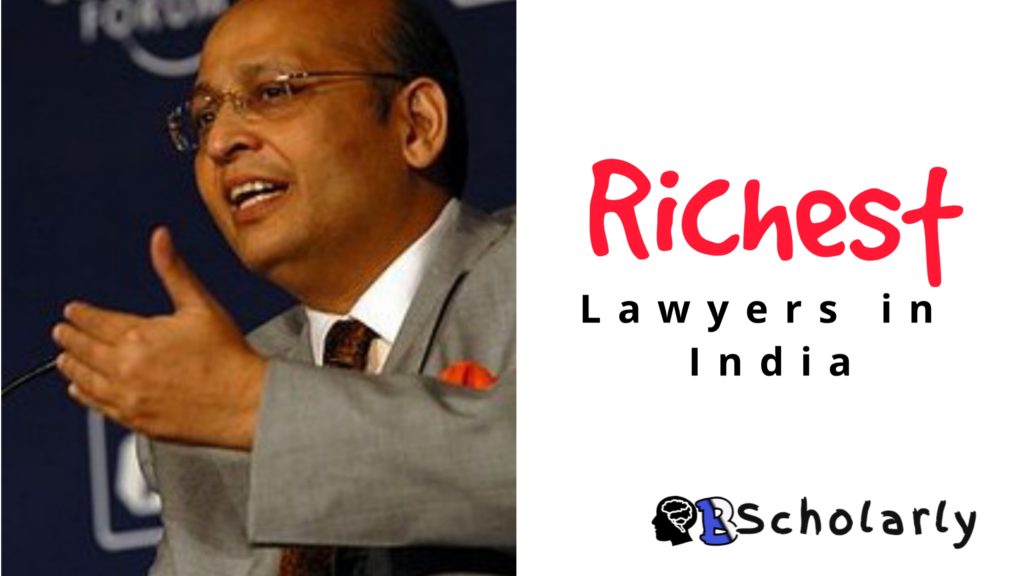 who is Indians richest lawyer?

There is probably no citizen of India that has not heard about Abhishek Manu Singhvi. He is not just a lawyer but a well known politician. Abhishek is a member of the Indian National Congress (INC) and a Member of the Parliament of India representing West Bengal in the Rajya Sabha, the Upper House of the Indian Parliament.

Obviously, Abhishek Manu Singhvi’s wealth is not majorly from the Legal profession, but that notwithstanding, he is still one of the highest paid lawyers in India.

As a senior lawyer, Abhishek takes nothing less than Rs. 6 – 11 lakh for appearance in any legal matter. The reason is because, he is a Senior Advocate of the Supreme Court of India.

Research shows that Abhishek Manu Singhvi was the youngest lawyer in the history of India to hold the position of Additional Solicitor General of India. This contributed to his popularity and prestige in the legal profession. 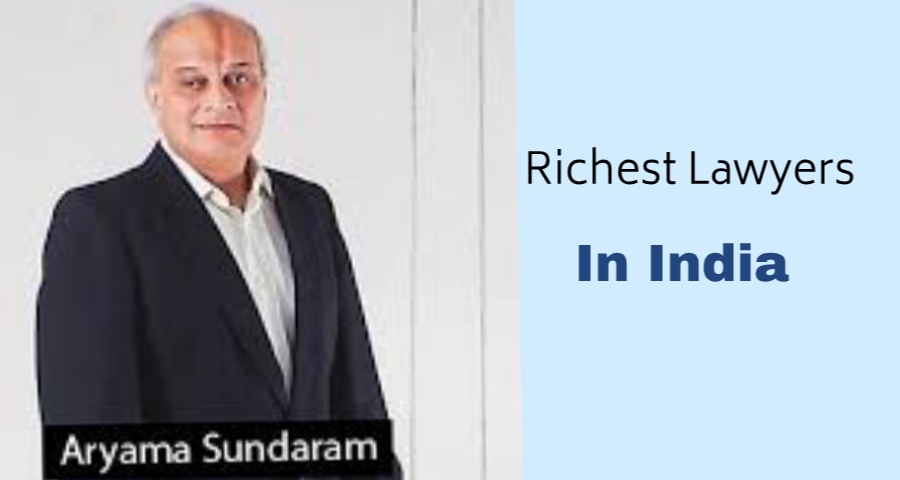 C. Aryama Sundaram is one of the Indian lawyers I respect so much. He is one of those bold lawyers that can rise up and condemn any action of the government that is not in line with the provisions of the law.

C. Aryama Sundaram is apparently one of the richest and most expensive lawyers in India too. According to my research, C. Aryama Sundaram has handled thousands of cases that has really contributed to the growth of the legal profession in India.

For example, in the popular S. Rangarajan case which resulted in one of the landmark judgments on the freedom of speech and expression, C. Aryama Sundaram was the one who argued in court for that judgment.

In my opinion, this is one of the lawyers in India that made their wealth mainly from the legal profession.

He is an inspiration to law students and young lawyers in India who want to constitution lawyers one day. Research however shows that C. Aryama Sundaram is basically a corporate lawyer. 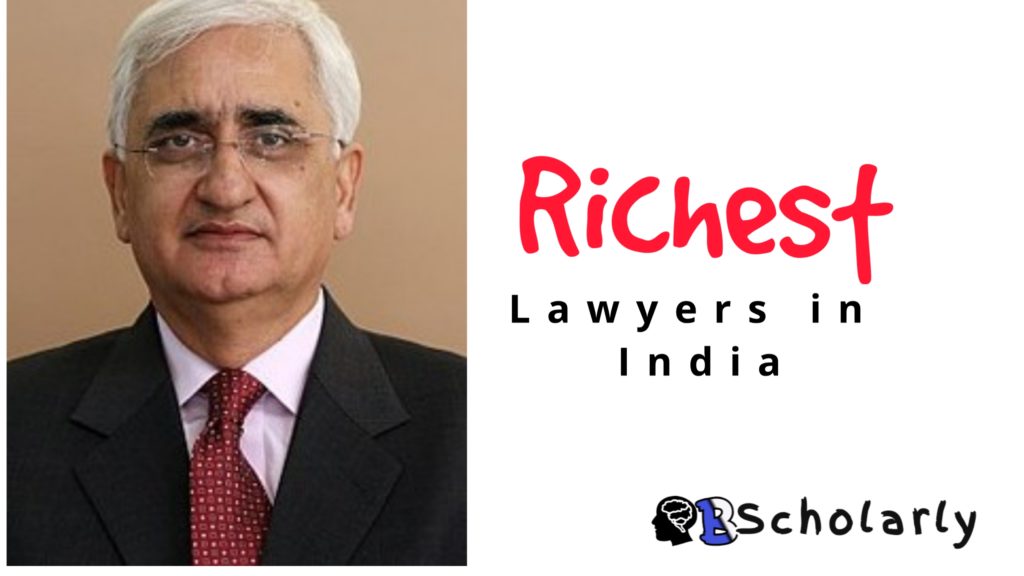 Salman Khurshid is one of the Indian lawyers that has proven that law is not just for people that want to leave an average life. Even as a lawyer, you can become as rich as you want to become. Salman studied at St. Stephen’s College, Delhi and St Edmund Hall, Oxford.

He is currently a politician, Senior Advocate, Eminent Author and a law teacher. According to my research, Salman collects nothing less than Rs 5 lakh for his appearance in court.

He has handled hundreds of Supreme Court Cases since he was called to the Indian bar. Even though Salman Khurshid decided to join politics in 1991 when he won election as a member of the parliament, he didn’t not totally end his legal profession. No doubt, he is one of the highest paid and richest lawyers in India today. 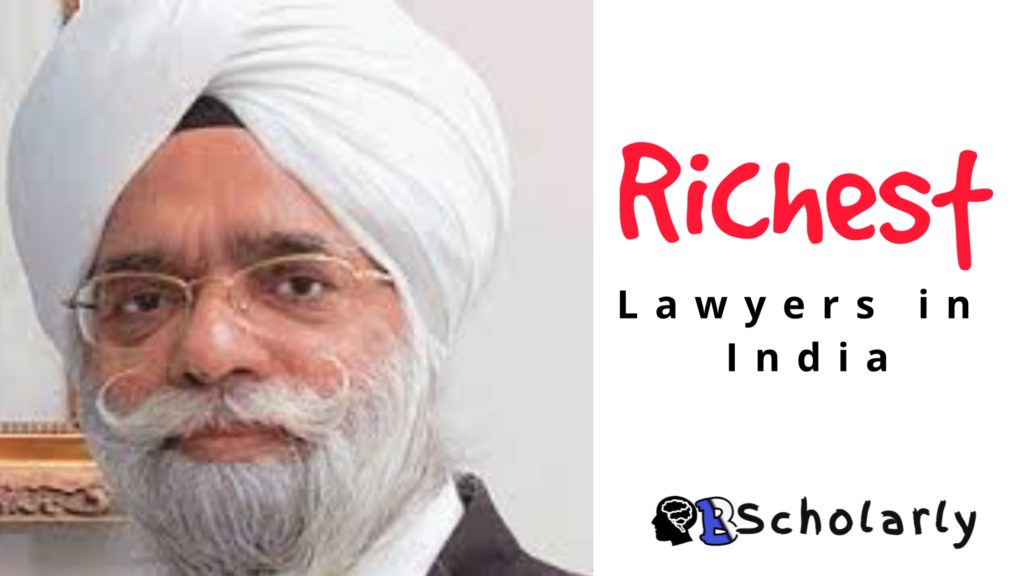 salary of lawyers in India

K. T. S. Tulsi is one of the top criminal law lawyers in India. He is a politician and a Senior Advocate in the Supreme Court of India. K.T. S. Tulsi has handled hundreds of Supreme Court cases in India since he was called to bar.

According to my research, K.T. S. Tulsi is also one of the richest lawyers in India currently. His appearance fee for any legal matter where he I called to argue, is nothing less than Rs. 5 lakh.

This is apparently because many people trust his capabilities. Aside that, he has been designated an Additional Solicitor General of India.

More so, as a politician, K.T. S. Tulsi was elected to the Rajya Sabha the upper house of Indian Parliament in 2020. This position made him even more popular and known in India.

K.T. S. Tulsi is married to Suman Tulsi and there are blessed with two daughters. 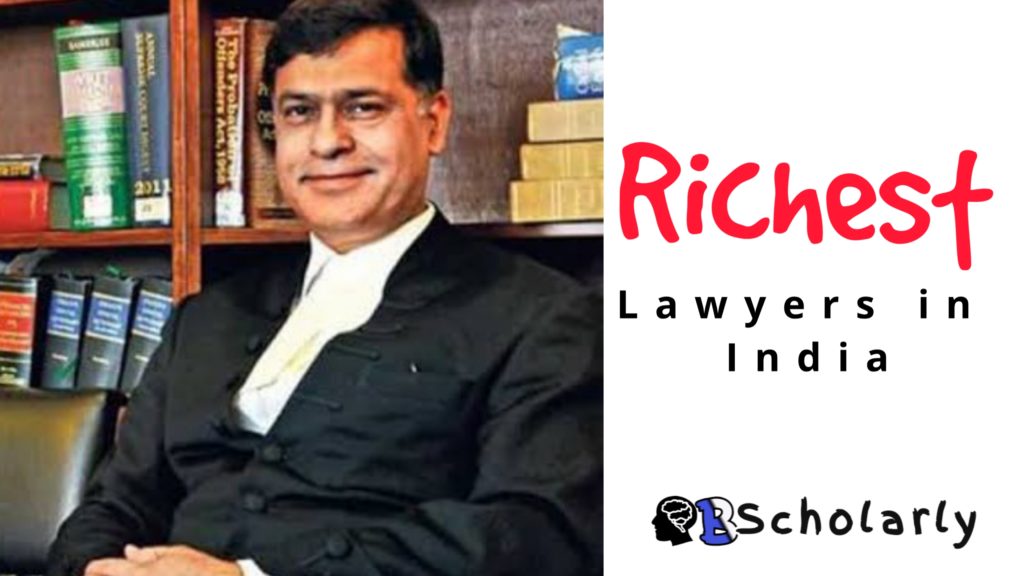 how much do lawyers earn in India?

Another successful criminal law lawyer in India is Sidharth Luthra. He is one of the powerful lawyers in India that specializes on litigation. Luthra is one of the lawyers that has really contributed to the legal system of India.

He schooled at the University of Cambridge and the University of Delhi (where he obtained his LLB in 1990). Currently, Sidharth Luthra also teach law in India and other institutions around the world. This should tell you how vast he is in the legal profession.

If you really want to know how creative Sidharth Luthra is, i enjoin you to read any of recent publications on the recent Corona virus pandemic. Trust me; you are going to love him.

Pinky is one of the top lawyers in India currently. She is a well-known, reputable and a Senior Advocate of the Indian Supreme Court. Pinky Anand went to Lady Shri Ram College for Women where she studied law and obtained her LLB. From her age, it is apparent that she has gain a lot of experiences and mastery of how the legal profession works in India. In fact, in 2007, she was nominated and awarded the the “Award of excellence in Law” that year. She has also published several authoritative articles and books too. 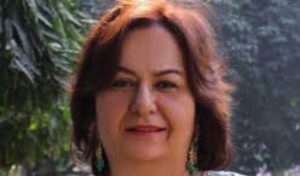 Currently, she is one of the richest and highest paid lawyer in India. Even as a politician, she is known for justice, fairness and supremacy of the law.

Okay! This is where I am going to drop my pen on the richest lawyers in India. It is pertinent to note that the above list may not be totally accurate, but it is apparent that the lawyers listed there are the most prominent lawyers in India. In one way or the other, they have shown that they are the best in their fields.

As a young lawyer or law student in India, i advise you to keep working hard in whatever area of law you love. Trust me; if you are dedicated, you will be among the top most paid lawyers in India one day.

Below is a video that explains the amount paid to Lawyers in India currently. I enjoin you to also check out this video for more information about the salaries of lawyers in India.