Home » Scholarly Articles » Meaning and Differences Between Ethics and Values

Meaning and Differences Between Ethics and Values 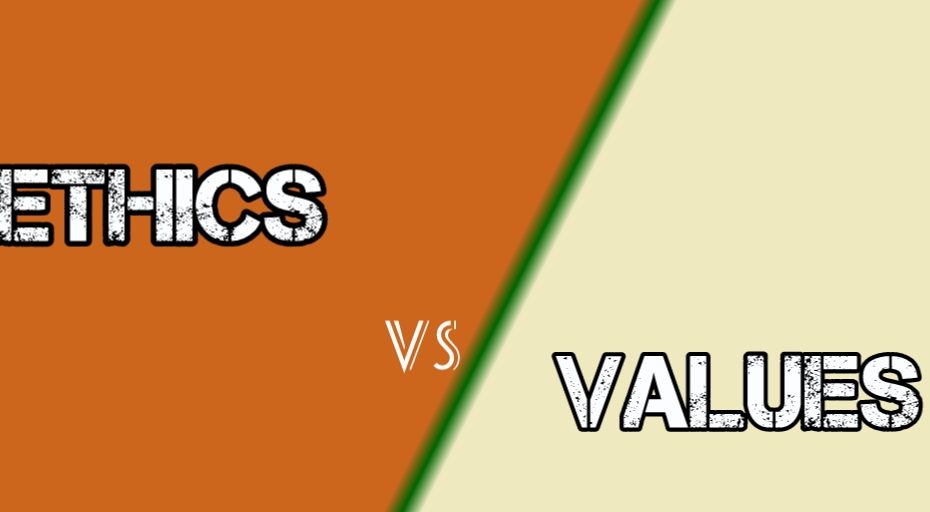 Differences Between Ethics And Values: Every sphere of the society, every group, organisation, family unit, have a set of beliefs and rules that guide or form the basis of their operation. These guiding rules, formally referred to as ethics and values, ensure the workability of the institution or organisation concerned, the individual interests and welfare of its members, structure creation and maintenance, as well as principle preservation and sustainability. 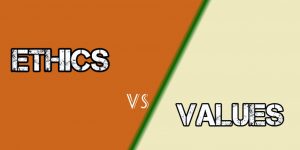 Differences Between Ethics And Values

Even though they essentially represent the same things, Ethics and Values are two distinct terms. The former represents an established, right way of doing things generally in a society, while the latter refers to a personal selection from these right ways of doing things, or an individual definition of what’s ideal.

Also see: Differences between a deed and an agreement

The term, ‘Ethics‘ is somewhat connected to morality. This is because it deals with discerning what’s right and what’s wrong in everyday life. Applying the meaning of ethics to daily life means weighing our thoughts, actions, intentions, general behaviour, etc on a scale of right and wrong. It is a branch of philosophy that sets a standard for how a person should act, and clearly sets out the opposite – injustice, vice, evil, unfairness, immorality – as behaviour not to be emulated.

Ethics places the bar above which humans are expected to act. With crime on one hand, and good conduct on the other hand, it helps in making the decision about what is appropriate behaviour and what isn’t, and to clearly establish how people in a society or community should act.

In the philosophical study of Ethics, certain important aspects are often discussed. They include; Meta-ethics, applied ethics, descriptive ethics and normative ethics. All these deal with the theoretical and practical aspects of Ethics; studying and analysing what could be standard behaviour, or morality for a society, how individuals and the society at large react to this set of rules guiding moral conduct, and how they can be truly applied by the people in everyday life, as well as unplanned circumstances that may arise and demand action.

When Ethics are taken to a personal level, then it becomes Values. Values make a person and determine how he’ll react in certain situations, what his moral compass would look like and what types of conduct particularly affect him. Values reach into the roots of a person’s emotions and sense of being, which explains why said person would select specific rules as a pertinent personal guide to his own behaviour.

Identifying an individual’s values makes them decipherable and make it easy to figure out why they act the way they do; or make the choices they make. Values also helps people create a sort of scale of preference on good behaviour. For instance, even though they are both viewed as good ethical behaviour, a person might have a preference for honesty over punctuality. This means that he may not necessarily hold late-coming as a serious act of misconduct, as much as he does a lack of transparency and truth.

Summarily, values greatly influence how we behave and interact with people, and often determines how well we could relate with certain people; including whether a friendship or even a relationship can work with them. Differences or similarities in values is often a good pointer to compatibility. Values also shape a person’s sense of judgement.

Major differences Between ethics and Values

Due to misconceptions surrounding what these two terms – ethics and values – represent, it is pertinent to clearly enumerate the differences between them.

1. Consistency and Variation: Ethics are not dynamic. They are consistent and don’t easily change. Once a community of people have decided on the set of rules and regulations that would guide them and adopted it as their way of life or culture, it is difficult to change that. On the other hand, what is obtainable as ethical behaviour in a society remains the same with each member of that society. It is the same set of rules that they are expected to abide by.

Values on the other hand vary from person to person. What an individual considers to be of value may not be what another individual finds valuable. One may hold honesty above all as the peak of moral conduct while another may hold kindness or respect as the ultimate. Values are not really consistent with persons or among members of a society.

2. Restriction and Motivation: Since ethics dictate how members of a society should behave, it can be safely said that it is restrictive or constraining. It prevents people from acting out of order, or acting a certain way that would be detrimental or contrary to the set moral code. Because ethics exist, there are things people are not allowed to do, and they are expected to limit their conduct or control their actions accordingly.

Values on the other hand motivates and inspires. Values are the driving factors behind a person’s actions and how they go about their lives. They define a person’s character traits, his dreams and ambitions, as well as what he holds important.

The major difference between ethics and values here is that while one prevents individuals from engaging in certain conduct, the other compels or motivates them to do what they have to do.

Also see: How to become a successful lawyer in 2021

3. Priorities and Moral Compass: Values help us identify what our priorities are as individuals, so that we can align accordingly. Ethics on the other hand, merely helps us forge a generally accepted moral compass, and have a sense of right and wrong.

4. Professional and Personal: Ethics operate on a professional or organisational level, while values operate on a personal or individual level. For instance, medical practitioners have an ethical code which they generally abide by; the Hippocratic code. Legal practitioners also abide by a code of client confidence. These set of rules basically apply to individuals in a collective or group setting.

Values however, concerns only the person involved. What he considers to be of worth, or of great importance is a personal matter.

5. Societal Conduct and Personality Traits: Ethics determine how a society functions and what it builds on to function in that manner. It defines what would be deviation from the status quo if carried out and what would be abiding by it.

Values on the other hand merely determines the workings of one person, his personality traits and behaviour.

Recommended: Differences between Law and Ethics

Ethics and values are equally important in maintaining order in the society. If there are no rules of ethics, it would be difficult to curtail or limit human behaviour. They’d be chaos and misunderstanding as everyone would want to do what they wish and not what’s right. Also, for the purpose of character building, ethics and values are important. This way we have members of the community who are driven and goal-oriented because of the values they have.