Names of Nigerian Presidents From 1960 till Date (With Pictures) 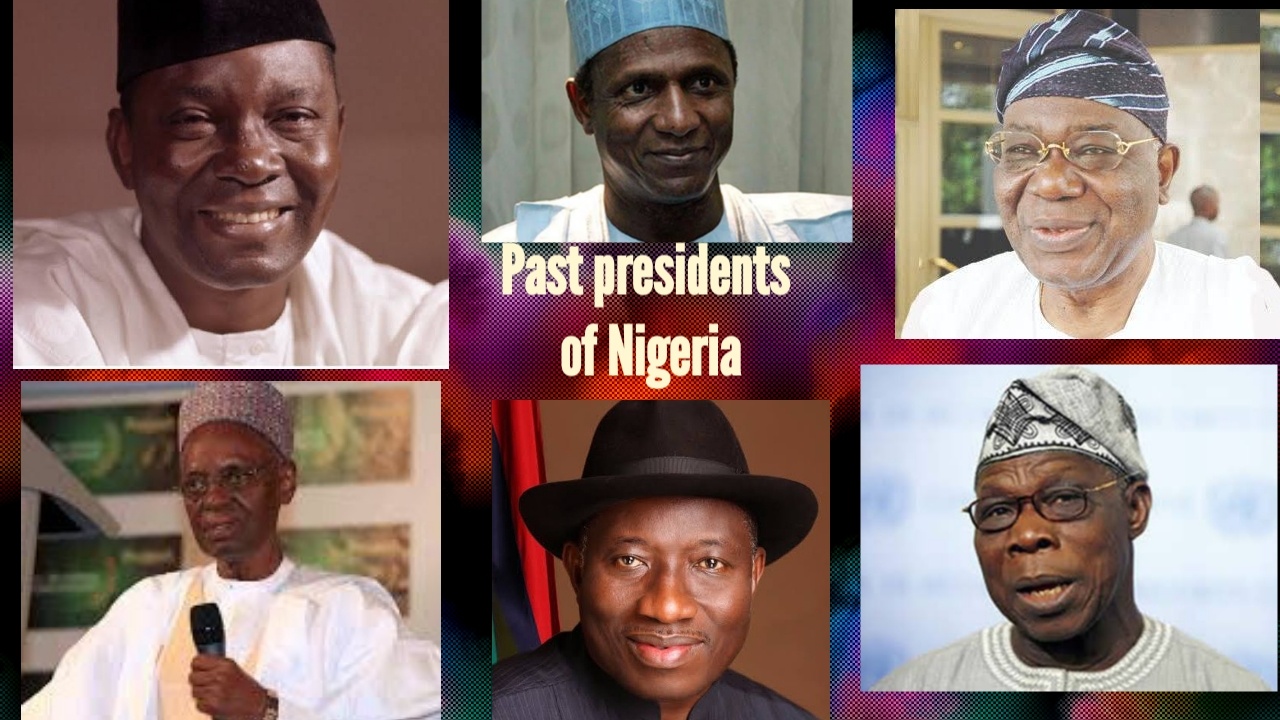 If you wish to know the Names of Nigerian Presidents From 1960 till Date, this article discusses everything you need to know about the past military leaders and presidents of Nigeria since independence till today (2020).

Nigeria is one of the biggest and most populated countries in Africa. She is also known as the giant of Africa because, amongst other African countries, Nigeria is more internationally recognized. Over the years, this country has been led by many presidents and military heads of state who, in one way or the other, contributed to the growth and development of the country. In fact, most of the past leaders of Nigeria laid foundation for some of the achievements of the country which is celebrated today.

For this reason, it is important that to keep remembering them. This article therefore highlights the names of all the past Nigerian presidents from 1960 till Date. Coupled with that, a brief biography of the past presidents of Nigeria will be given. I enjoin you to read this content carefully so that you will be able to grasp everything contained in it. 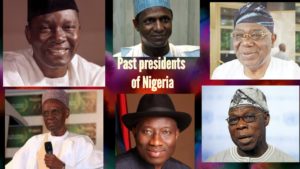 Names of Nigerian Presidents From 1960 till Date.

Past Nigerian presidents since independence till date (1960 – 2020)

Above is a list of the names of all the presidents of Nigeria since independence. For more information about these leaders, i recommend you keep reading as I disclose more about each of the names mentioned above.

Meanwhile, the video below also gives detailed information about the past presidents of Nigeria from 1960 till Date. 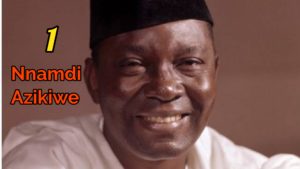 Dr Nnamdi Azikiwe was the first President of Nigeria from 1963 till 1966 (Preceded by Queen Elizabeth II and Succeeded by Johnson Aguiyi-Ironsi). He was a well known stateman and one of the persons in the frontline fighting for the independence of Nigeria in 1960. For this reason, Nnamdi Azikiwe is generally known as the father of Nigerian Nationalism. Other persons who also played crucial role in the independence of Nigeria includes; Ahmadu Bello, Herbert Marculey, Awolowo etc.

It will surprise you to know that Dr Nnamdi Azikiwe is a typical Igbo man, though he was born at Zungeru in present-day Niger State. While he was growing up Nnamdi Azikiwe learned to socialize with everyone. In fact, he new how to speak Hausa very well. This contributed to his popularity and firm character as a child.

Before enrolling into politics, Dr Nnamdi Azikiwe was well educated. He attended Storer College in the US, where he was known as Ben Azikiwe. He also attended Howard University, Lincoln University, and even the prestigious University of Pennsylvania. After his education, Azikiwe returned to Nigeria and became a core member of the National Council of Nigeria and the Cameroons (One of the political parties in Nigeria during the first republic). 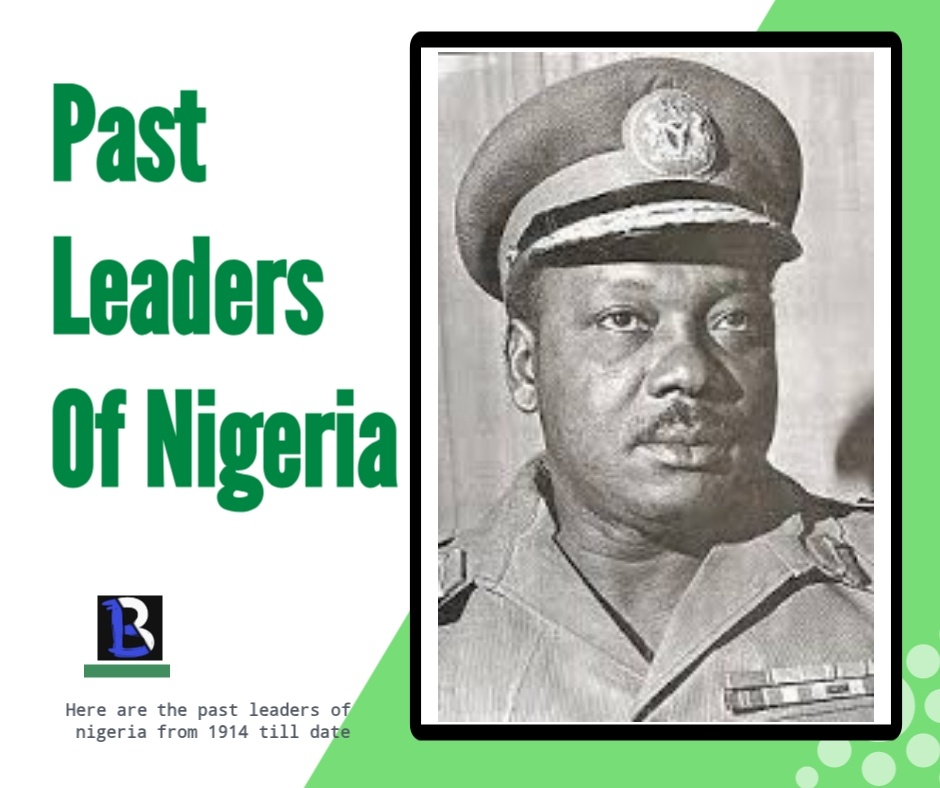 Johnson Thomas Umunnakwe Aguiyi-Ironsi was the first Military Head of State in Nigeria. He was born in Abia State, Nigeria but he grew up with his sister at Kano before joining the Nigerian Regimen at the age of 18. Aguiyi-Ironsi is popularly known as the leader that brought unitary system of government into Nigeria. However, that system of government did not last for long.

Due to the fact that most northerns didn’t like his administration, he was assassinated on the 29th of July, 1966. This brought in the government of Yakubu Gowon in 1966. 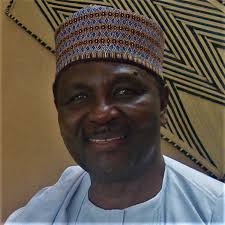 Another unforgettable leader of Nigeria is General Yakubu Gowon. He was Nigeria’s youngest military chief of staff at the age of 31. Yakubu (also called Jack) is known for leading Nigeria during the Civil War.

History has it that Gowon was a strong, smart and educated leader. He as born in Plateau State as the fifth of eleven children of his parents. While he was growing up, he was the best amongst his peers when it comes to athlete. In 1966, Gowon was chosen to become head of state for Nigeria. His government created the first 12 states in the history of Nigeria. 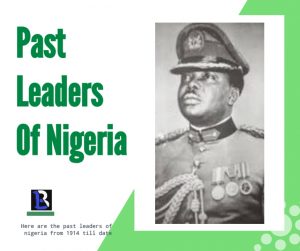 General Murtala Mohammed didn’t stay long in power because he was assassinated. He became the 4th Head of State of Nigeria in 1975 and was killed in 1976 by some members of Dimka’s abortive coup.

Immediately after his death, Obasanjo Olusegun took over power and completed his plan to hand over power to a civilian government. Aside that, Obasanjo also carried out many reforms in the country in fulfillment of General Murtala Mohammed’s goal for the country. 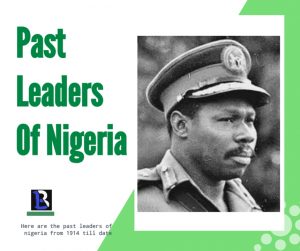 Olusegun Obasanjo past leader of Nigeria

General Obasanjo Olusegun is one of the past governor generals of Nigeria that really contributed to the growth and development of the country. He was also called Baba Africa and was active during the Congo Crisis and the Nigerian Civil War.

Obasanjo joined the Nigerian Army in 1958. His leadership is seen as one of the most successful in the history of Nigeria. In fact, majority of the achievements of the military in Nigeria were under his government. 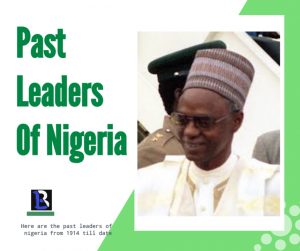 pictures of past Nigerian leaders

Research shows that Shehu Usman Shagari joined politics in 1951. He was one of the respected personalities in NPN (National Party of Nigeria). Even before he was elected president of Nigeria, he was actively participating in the development of Nigeria.

For instance, between 1959 – 1960 he did great things as the minister of economic development in the country. It will surprise you to know that Shagari was a one time governor for the World Bank and a member of the International Monetary Fund (IMF) committee of twenty. 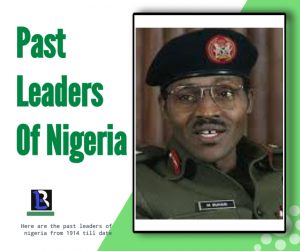 past leaders of nigeria from 1960 till Date

Muhammadu Buhari is the current president of Nigeria and a one time military head of state in Nigeria (1983 to 1985). He was born in 1942 into a Fulani family. At his young age (19), Buhari was already a student at the Nigerian Military Training College (NMTC).

At 20 years he was given the title of second lieutenant and appointed Platoon Commander of the Second Infantry Battalion in Abeokuta. Buhari was a crime fighter during his government. He hated corruption and tried everything possible to curb the problem. 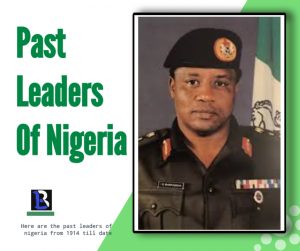 all the past presidents of Nigeria since 1960

General Ibrahim Babangida is also known as IBB. He was an exceptional leader of Nigeria and one of the best military president Nigeria has had. Babangida removed Muhammadu Buhari during his military government and ruled until 1993 when he resigned.

It will surprise you to know that Ibrahim Babangida was born on 17 August 1941. He grew up with his parents until he officially joined the Nigerian Army on 10 December 1962. During military rule in Nigeria, Babangida was seen as the key plotter of military coups.

MUST READ: HOW to become a successful lawyer in Nigeria 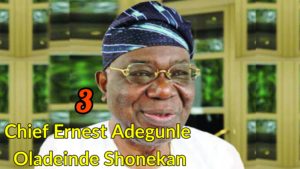 Past presidents of Nigeria

Apparently, Chief Ernest Adegunle Oladeinde Shonekan was the first lawyer to become the president of Nigeria. Before he was appointed into power, Shonekan was the chief executive of the United African Company of Nigeria PLC, a large Nigerian conglomerate.

Coupled with Chief Ernest Adegunle Oladeinde Shonekan regime was Moshood Abiola as the vice president of the country. They two worked together until the military intervened again. 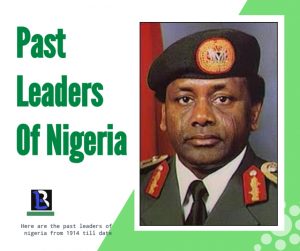 names of Nigerian Presidents From 1960 till Date

Abacha is one of the well known dictators in the history of Nigeria. He served as the military head of state of the country from 1993 till 1998 when he was kill of heart attack. During the Civil War, Abacha was the platoon and battalion Commander. His government was tyrannic in nature.

Abacha’s leadership was unlike every other past leader of Nigeria. His policies and decisions were heavily criticized in Nigeria and other parts of the world. That does not also mean that there was no positive achievements during his leadership. 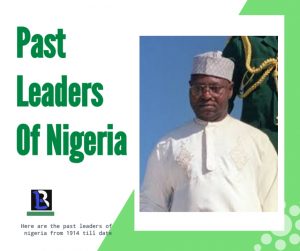 General Abdulsalami Abubakar is another significant leader in the history of Nigeria. He was very active in the Nigerian Civil War and the 1978 South Lebanon conflict. General Abubakar was born in 1942 by Abubakar Jibrin, a well known personality in Minna, Niger State, Nigeria.

As a young man, General Abubakar schooled in Nigeria. He served in the Nigerian Air Force and Army in 1963–1966 and 1966–1999 respectively. Abubakar also served as the de facto President of Nigeria from 1998 to 1999. He succeeded Sani Abacha after his death. 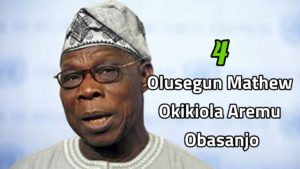 Olusegun Mathew Okikiola Aremu Obasanjo is a well known political figure in Nigeria even till today. He is popularly called Baba Africa. Obasanjo became the president of Nigeria from 1999 to 2007. His vice at that time was Shehu Musa Yar’Adua.

It will surprise you to know that before and during his regime as president, he was and adent member of the Peoples Democratic Party (PDP). According to research, President Obasanjo spent most of his first term travelling abroad. He was able to win at least some Western support for strengthening Nigeria’s nascent democracy.

MUST READ: How to retrieve lost WAEC certificate: step by step process 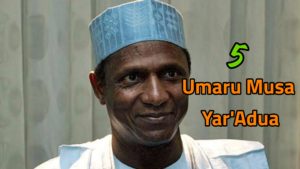 Leaders of Nigeria from 1960 till today

Umaru Musa Yar’Adua took over power from Obasanjo after he was declared the winner of the controversial Nigerian presidential election held on 21 April, 2007. He was the former governor of Kastina state before becoming the president of the country. It will surprise you to know that Yar’Adua took over from this father who was also an ardent politician. In fact, he (his father) was the National Vice chairman of the National Party of Nigeria (NPN).

Even before becoming the president of the federal republic of Nigeria, Umaru Musa Yar’Adua has been contributing to the development and growth of the country. He was a member of the 1988 Constituent Assembly.

Sadly, Umaru Musa Yar’Adua died as a result of a sickness which he traveled outside the country to treat. On returning back to the country (24 February,2010), his vice president, Goodluck Ebele Jonathan took over power as the president of the country.

past presidents of the federal republic of Nigeria

During his regime, the country had one of the best leaders in the world. However, due to the incessant security problem, some citizens criticized his government for not being able to handle the problem.

In 2015, president Goodluck Ebele Azikiwe Jonathan lost the 2015 presidential election to Muhammadu Buhari. He pacificly handed over power to the newly elected president and said “Nobody’s ambition is worth the blood of any Nigerian.” Currently, Goodluck Jonathan is the chairperson of the newly inaugurated International Summit Council for Peace (ISCP). He is also known as the ambassador of peace. 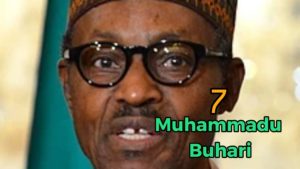 Muhammadu Buhari is the current president of the federal republic of Nigeria. He assumed office in 2015 through the All Progressives Congress (APC), defeating the incumbent President Goodluck Jonathan. To some citizens, President Muhammadu Buhari’s regime is a failed one.

However, some citizens posit that he is doing very well as president of the country. Prof. Yemi Osibajo (a professor of law) is the vice president in this regime. It may interest you to know that President Muhammadu Buhari is a one time Governor of Bornu state (3 February 1976 – 15 March 1976).

Muhammadu Buhari hails from Daura, Katsina State. According to research, he is from a fulani family and his father died when he was still 4 years old. His government is hell bent on eliminating corruption in the country.

Most populated universities in Nigeria

Causes, Effects and Solutions to examination malpractice in Nigeria

Features of customary law in Nigeria

There you have the the names of Nigerian Presidents From 1960 till Date with a little biography of them. Hope this helps you to understand Nigeria more and how these leader contributed to the development of the country.