Richest Doctors in Nigeria and Their Networth 2022: Top 8 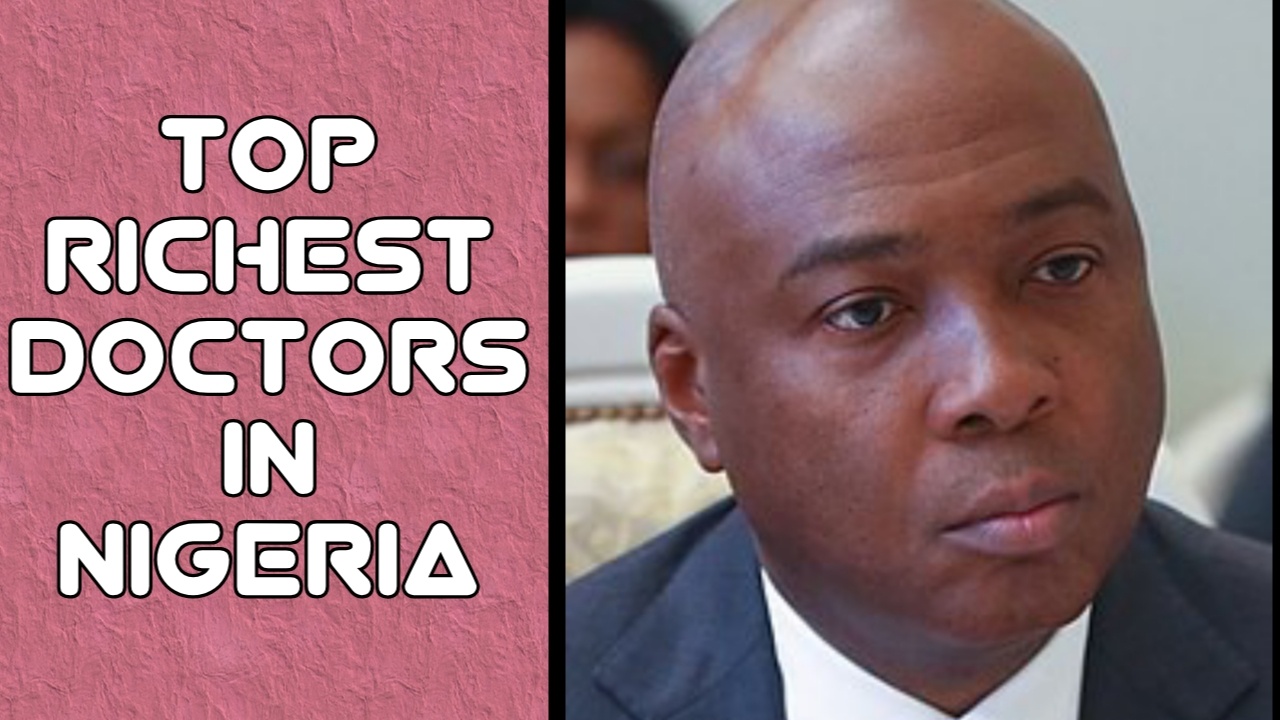 Richest doctors in Nigeria: Believe it or not, doctors are like billionaires when compared with other professions in Nigeria. In most universities, students of Medicine and Surgery are given the highest respect because it seems like the Nigerian society actually value them more than any other profession. This apparently the same reason why doctors get Job easily in Nigeria.

Nonetheless, I have heard many young doctors say that the medical profession is not very lucrative in Nigeria. Well, that might be true to some extent, but it doesn’t overrule the fact that there are still doctors who are very rich in Nigeria.

In this article, i will disclose the top richest doctors in Nigeria this 2021. In my opinion, the doctors in this list are those who have really distinguished themselves and showed outstanding skills in their area of specialty.

If you have been searching the internet to know the richest doctors in Nigeria, this is best article for you. Trust me; you will not regret reading this one.

Note: It is pertinent to also note that not all the doctors mentioned in this list made their wealth solely from the medical profession. Some of them have other sources of income.

Below are the top richest Doctors in Nigeria and their estimated net worth:

Okay! Those are the top richest doctors in Nigeria currently. I guess you are already thrown aback by the kind of people mentioned in that list. Believe it or not, they are the richest. That notwithstanding, if you need more information about the doctors I just mentioned above, kindly join me as I give you more details about them below! 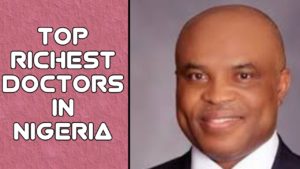 how much are doctors paid in Nigeria?

Ambrose Bryant Chukwueloka Orjiako is a trained orthopedic and trauma surgeon from the University of Calabar (UNICAL). After graduating from the university, he worked at the Lagos University Teaching Hospital for many years before he became a Senior Registrar at the National Orthopaedic Hospital, Igbobi, Lagos. This was not actually what made him very rich anyway.

Accordingly to my research, Ambrose Bryant Chukwueloka Orjiako later started a private business with interests in both the upstream and downstream sectors of the Oil Industry, Shipping, Banking Insurance, and Pharmaceuticals.

He is indeed an inspiration to young doctors and medical students in Africa as a whole.

2. Dr. Godwin Maduka – N500 billion: I know most of you don’t know Dr. Godwin Maduka before now. Yes! I didn’t know him too until I traveled with my friend to Umuchukwu LGA in Anambra State. On our way, I saw many beautiful projects by this great man. 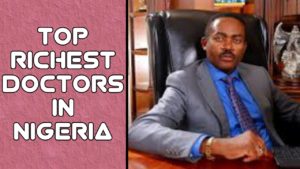 Richest doctors in Nigeria according to Forbes

Conversely, I decided to do a little research about him. According to my research, Dr. Godwin Maduka is a popular and well respected person in his society. In fact, he is also known as the Lion of Africa. People who knows his background call him Okeosisi Orumba, a name that is only given to prestigious personalities in the Igbo society.

Dr. Godwin Maduka has made a lot of impact since he was born. He grew up at Umuchukwu LGA and also went to school there. Maduka studied at the prestigious University of Port Harcourt. He is even one of the notable alumni of the university.

However, he didn’t actually finish his studies at the University of Port Harcourt because he was indigent. Fortunately, he met a friend who helped him to gain admission into Rust College. This was actually the turning point of Dr. Godwin Maduka’s life. After studying at Rust College, he was offered another scholarship to study Pharmacy at Mercer University. This also shows that he was very hard working in school.

Before he became the founder of Las Vegas Pain Institute and Medical Center, he worked in many places including the UNLV School of Medicine.

All these things contributed to the success of this great man. Apparently, Dr. Godwin Maduka is one of the doctors that actually became very rich through their profession. He is undoubtedly one of the richest doctors I can possibly pick point in Nigeria.

3. Dr. Chris Nwabueze Ngige – $40 million: Did you know that Chris Ngige is a certified medical doctor in Nigeria before now? I guess you didn’t. This shouldn’t surprise you because most of the politicians in Nigeria are actually gurus in one field of education or the other. 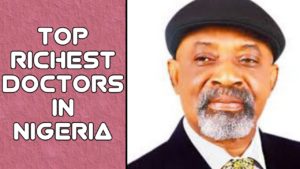 Dr. Chris Nwabueze Ngige (Popularly referred to as Chris Ngige) is actually a medical doctor from the prestigious University of Nigeria, Nsukka (UNN). He is the current Minister of Labour and Employment Nigeria and a well known politician in Nigeria.

Accordingly to my research, Dr. Chris Nwabueze Ngige did very well during his university days, though he always had the urge to lead people. For that reason, he didn’t really practice as a medical doctor. Immediately after he graduated from school, he chased his dream by going to work as a Civil Servant, serving the National Assembly at different times.

This was where he got the connections he needed as a politician. According to Wikipedia, Dr. Chris Nwabueze Ngige was made the Assistant National Secretary and Zonal Secretary of the Peoples Democratic Party (PDP) in the Eastern region of Nigeria.

As at the time this article was written, has has served as a Senator for Anambra Central, Governor of Anambra State and he is currently the Minister of Labour and Employment, appointed by President Buhari.

Frankly speaking, I didn’t know that Bukola Saraki is a medical doctor until I did my research on the research doctors in Nigeria. Just like Dr. Chris Nwabueze Ngige, he is a well known politician too.

Apparently, his source of wealth is not actually from his profession. Saraki is from a wealthy family even before he graduated from school and went into politics. 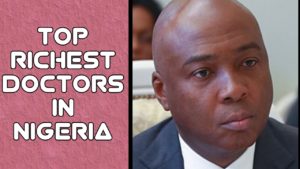 It will surprise you to know that Dr. Olubukola Saraki was born in London. However, he went to King’s College, Lagos for his elementary education before proceeding to Cheltenham College in the United Kingdom to study medicine from 1979 to 1981.

Throughout his history, Dr. Olubukola Saraki only worked as medical officer in Rush Green Hospital from 1979 to 1981. Afterwards, he returned to Nigeria and was appointed by the president (Olusegun Obasanjo) as his personal assistant on budget.

Dr. Olubukola Saraki has also served as the Governor of Kwara State, Senator of the Federal Republic and President of the Nigerian Senate until 2019. No doubt, he is also among the richest Doctors I can possibly point out in Nigeria. 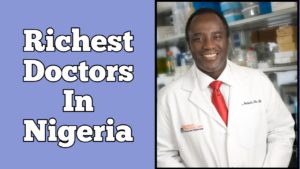 who is the richest lawyer in Nigeria?

Accordingly to Wikipedia, Johnson was born in Nigeria. He went to the prestigious King’s College in Lagos, but later traveled abroad to further he studies. He obtained a doctorate degree in medicine, from the University of Glasgow in 1993. This was when he became known in Nigeria and even abroad.

Currently, he a professor and the Chairman of the department of Psychiatry and Neurobehavioral at the University of Virginia, one of the most popular universities in the world. 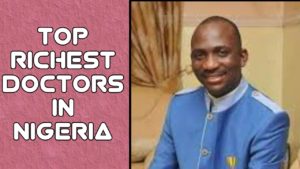 It will surprise you to know that Dr. Pastor Paul Enenche is from Orokam LGA, Benue State. Before he became a pastor, Paul and Becky Enenche (his wife) were practicing medical doctors at Benue State.

Even as a pastor, Dr. Pastor Paul Enenche still contributing to the medical profession in Nigeria. Many a time he has built hospitals and schools for the less privileged in Nigeria.

In fact, in this current Corona virus pandemic, Dr. Pastor Paul Enenche helped by providing some facilities which was used to prevent the virus in many states.

Apparently, Dr. Pastor Paul Enenche did not make his wealth from the medical profession because he is no longer into full time practice. That notwithstanding, he is still one of the medical doctors I can possibly point out in Nigeria currently.

How to Sue someone in Nigeria: the Ultimate Guide 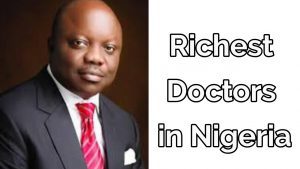 According to research, Emmanuel Uduaghan worked at Delta Steel Company, as a medical officer (from 1989 to 1994). Also at the University of Benin Westend Hospital, Warri, he was a consultant anesthesiologist. Dr. Emmanuel Uduaghan only joined politics in 1999 when he was appointed as the Commissioner for Health by James Onanefe Ibori.

Currently, Emmanuel Uduaghan is married to Roli and they have two kids together. His exact networth is not known by anyone however, it has been recorded that his networth is around millions of naira.

Jonathan is undoubtedly among the richest Nigerian doctors still practicing as a medical doctor till today. He is based in the United States and he has practiced there for over 21years after he graduated from the University of Nigeria.

In the US, Jonathan Nwiloh practices as a thoracic surgeon but he is permanently attached to any hospital. According to usnews, he is afflicted to several hospitals that usually call him when he is needed.

It will surprise you to know that Dr. Jonathan O. Nwiloh is a native of Anambra, Nigeria. He schooled in Nigeria but eventually traveled abroad to further his education and practice. While he was over there, report shows that he still continued to do very well in his academics. After graduating, he won the Annual Surgical Director’s Award for Outstanding Academic Achievement.

Apparently, Dr. Jonathan O. Nwiloh, MD is a self-made doctor. Online other medical practitioners, he worked very hard in his field and made all his money from it. Today he is celebrated in his country Nigeria and even his fellow doctors also respect him. He is currently the President and Founder, Global Eagle Foundation (an NGO aimed and helping humanity)

RECOMMENDED: Salary of doctors in Nigeria 2022

This is where I am going to stop for today. As you already know, this list was not fabricated from thin air. The doctors mentioned here are actually the richest in Nigeria. Though not all of them made their wealth from the medical profession.

Hope you enjoyed this write up? If you did, make sure you share this work to as many medical student as you can. This will definitely inspire them to work harder in their profession. I believe this article has also proven that it is very possible to be a very rich doctor in Nigeria.

By way of conclusion, i would like to entertain your questions and contributions to this topic. Kindly use the comment section below to tell me what you think about the top richest doctors I just shared with you.