Differences Between Osmosis and Diffusion 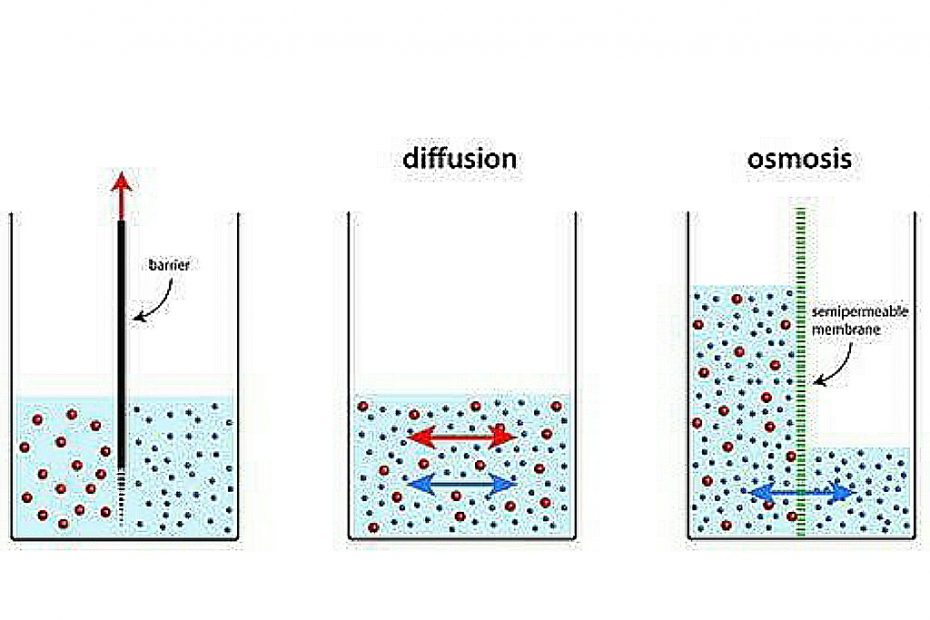 Differences Between Osmosis and Diffusion: Biological membranes are known to act as a physical barrier between a live organism’s internal environment and the outside world. While they must be impermeable at some points to prevent some chemicals from entering, they must also be permeable to certain vital substances and nutrients in order for them to enter and exit the cell. 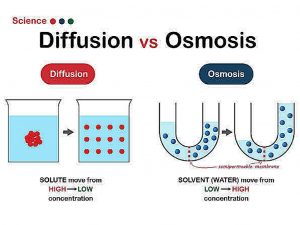 Description of Diffusion and Osmosis

Also see: Best Science Courses to study in the University

Even if you don’t understand what diffusion is, you’ve probably witnessed it. Can you recall entering into your front door and smelling something delicious emanating from the kitchen? The scents were detected due to the diffusion of molecules from the kitchen to the front entrance of the house. 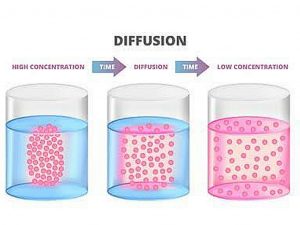 Similarities and Differences Between Osmosis and Diffusion

More molecules, on the other hand, will be driven towards the less concentrated area over time. As a result, molecular migration is always from more densely packed parts to less densely packed ones. Many things have the ability to disperse. Odors travel via the air, salt travels through water, and nutrients travel from the bloodstream to the tissues of the body.

Diffusion is the random dispersion of particles from a high-concentration area to a low-concentration area. A concentration gradient is the term for this uneven distribution of molecules. Dynamic equilibrium is reached when the molecules are evenly dispersed. Because molecules continue to migrate, the equilibrium is considered to be dynamic, yet there is no net change in concentration over time. The process of diffusion affects both living and nonliving systems. Diffusion is essential for the passage of a vast variety of substances into and out of cells in biological systems, including gases and tiny uncharged molecules.

Recommended: Arts vs Science, Which is Better? Answered

Osmosis is a form of diffusion that details the transfer of water from a increased concentration zone to a low-concentration region over a semi-permeable barrier. Semi-permeable membranes are often very thin layers of material that allow certain items to pass through but restrict others from passing across. Semi-permeable membranes are found in cell membranes. Small biomolecules like oxygen, water, carbon dioxide, and fructose can flow across cell membranes, while bigger molecules like sucrose, proteins, and glycogen cannot. 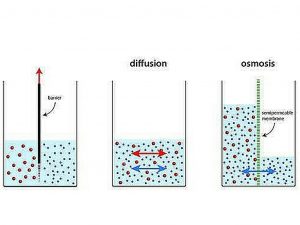 Whats the difference between osmosis and diffusion

Recommended: Duties and responsibilities of Children in the Family

Let’s go at the intricacies of osmosis and diffusion to better grasp the differences between the two. Osmosis is a chemical solution separation technique that involves two components: a solvent and a solute. In addition, when a solute dissolves in a solvent, the final product is a solution.
Due to osmosis, there are three main types of solutions that effect cells. Furthermore, the first type of solution is an isotonic solution, which has the same solute concentration within and outside the cell.

Furthermore, in a hypotonic solution, the concentration of solutes inside the cell is larger than the concentration outside. Finally, there is more solute outside the cell than inside it in a hypertonic solution. Because plant and animal cells can tolerate differing quantities of water, osmosis impacts them differently. In a hypotonic solution, for example, an animal cell will fill with too much water and lyse, or burst open. Plant cells, on the other hand, have a higher water need than animal cells, and their thick cell walls prevent them from bursting.

Reverse osmosis, on the other hand, occurs when water moves over the membrane in the opposite direction of the concentration gradient, from lower to higher concentration.

There’s also a distinction to be made between diffusion and active transportation. This is because active transport is defined as the transportation of molecules and ions against a gradient concentration while exerting energy expenditure. Diffusion, on the other hand, requires no energy cost.

Differences between osmosis and diffusion

Osmosis: The process of moving solvent molecules across a semi-permeable membrane to an area with a greater solute concentration is known as osmosis.

Diffusion: In any form of combination, diffusion is the movement of molecules along a concentration gradient.

Osmosis: Only the solvent (water molecules) moves in osmosis.

Diffusion: Both the solute and the solvent molecules move during diffusion.

Osmosis: The semi-permeable membrane is engaged in osmosis.

Diffusion: The semi-permeable membrane is not engaged in diffusion.

Recommended: Most Talented People In The World 2022 (With Pictures): Top 10

Diffusion: It is unaffected by solute, water, or pressure potentials. In addition, it is mostly dependent on the existence of other particles.

Osmosis: Osmosis moves in such a way that it tries to equalize solvent concentration, but this does not happen.

Diffusion: Diffusion moves the concentration around in the system, balancing it out.

Osmosis: Osmosis is necessary for the distribution of nutrients throughout the cell as well as the elimination of metabolic waste.

Diffusion is necessary for the production of energy through respiration and photosynthesis.

Osmosis: Osmosis is opposed by these two forces.

Diffusion: Diffusion is not generally subjected to these two pressures.

Diffusion: It aids in mineral and vitamin absorption.

Osmosis: By providing more pressure to the solution side, the entire process may either be stopped or reversed.

Diffusion: This is a procedure that can’t be halted or undone.

Osmosis: It only happens amongst solutions of the same kind.

Diffusion: This occurs between solutions that are similar and those that are distinct.

Recommended: Differences Between Agent And Servant

There are two types of transport mechanisms for incorporating the flow of molecules into and out of the cell: osmosis and diffusion. These two systems are passive transport systems since they do not require any additional energy to operate, while assisted diffusion does. The medium in which the two systems are used is the most significant difference between them. Although osmosis can only work in a liquid media, diffusion may happen in all three: solid, liquid, and gas.

Furthermore, although diffusion does not necessitate a semi-permeable membrane, osmosis must. Osmosis is demonstrated by the uptake of water by plants. When a drop of food coloring is dropped into a glass of water, diffusion occurs, and the entire water content gets colored.