Home » Legal Articles » Hierarchy of Courts In Nigeria: The Superiority of Courts in Nigeria Explained

Hierarchy of Courts In Nigeria: The Superiority of Courts in Nigeria Explained 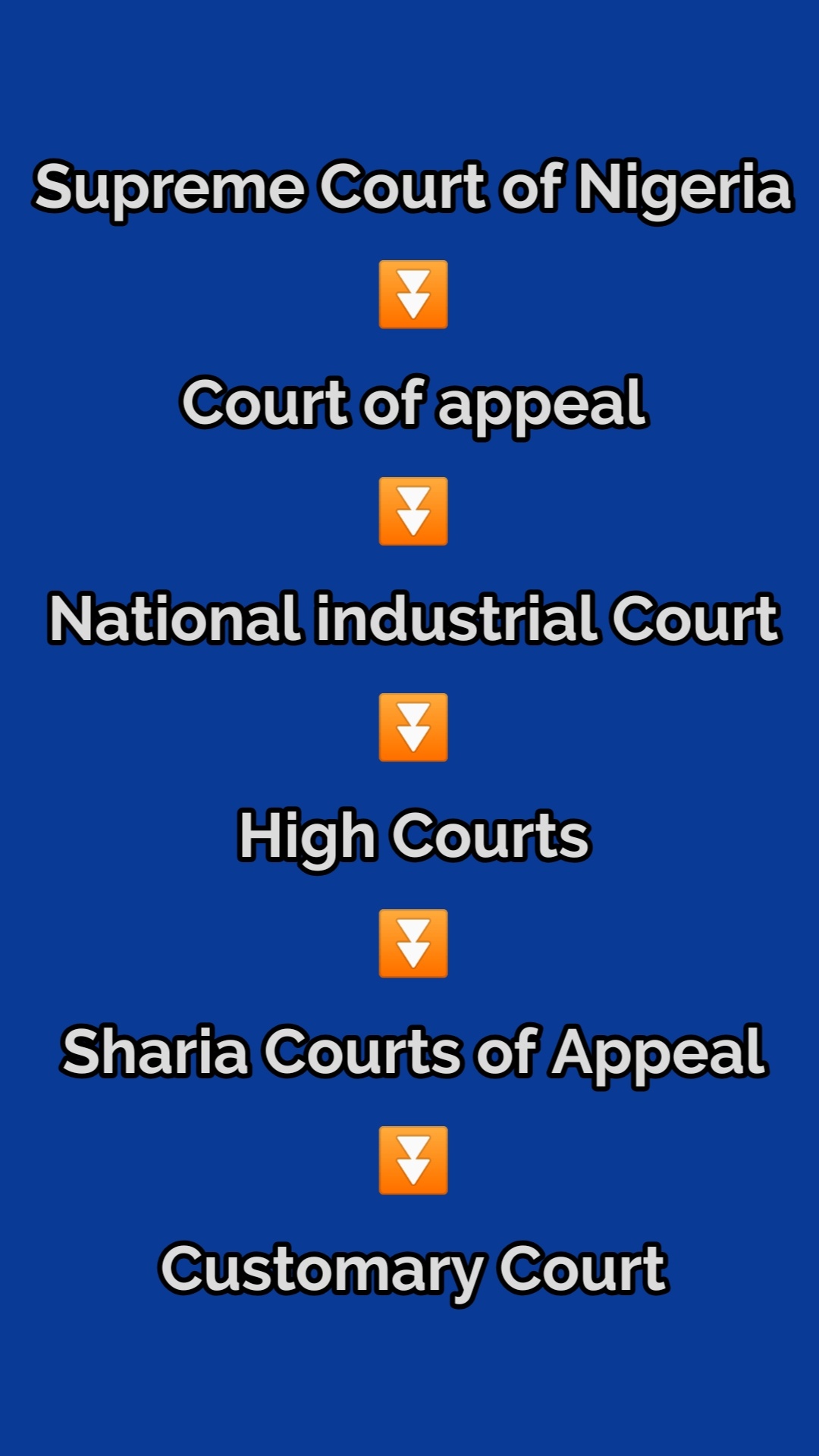 It is evident that the Nigerian Legal system does not support a single court system. Consequently, courts in the federation are structured in a hierarchical order. The hierarchy of courts in Nigeria is very important because it determines the kind of matters that can be brought before any court. Take for instance, matters concerning land or women inheritance right cannot be brought under the original jurisdiction of the supreme court because those kinds of matters are under the original jurisdiction of customary courts. As we continue, i will comprehensively explain the hierarchy of courts in Nigeria.

First and foremost, it is apparent that the Judicial powers of the Federal Republic of Nigeria is vested in the Courts and provided for in section 6 subsection 1 and 2 of the 1999 Constitution of Nigeria. These courts are courts of superior records. While some are courts of co ordinate jurisdictions in a horizontal scale, they can also be ranked on a vertical scale showing courts that are superior to the other in terms of decisions.

The consequences is that a higher court can hear appeal from a court below it and can also override the decisions made in error by the later. This article discusses the various courts of record in Nigeria according to their superiority, with the Supreme Court being the court of last resort and highest court in Nigeria. 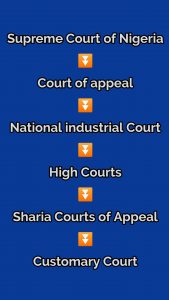 hierarchy of courts in Nigeria

How to become a successful lawyer in Nigeria: the Ultimate Guide

Characteristics of customary law in Nigeria

Section 6 of the constitution of the Federation Republic of Nigeria under subsection 5, listed the courts in Nigeria in a hierarchical order. They include:

There you have the hierarchy of courts in Nigeria. As we continue, the above listed courts will be discussing in their hierarchical order. I enjoin you to continue reading because you are not going to regret reading this information.

In Nigeria, we only have one Supreme Court which is located in Abuja, the federal capital territory. According to Section 230, subsection 2 paragraph (a) and (b) of the constitution, it is headed by a chief justice of Nigeria who is appointed by the president on the recommendation of the National judicial council subject to the approval of the senate. ((see section 231 subsection 1 of the constitution))

Also read: Can the supreme court overrule itself own decision? See answer here

It means that the decisions of the Supreme Court is binding on it. The court of appeal has original jurisdiction to hear matters of elections into the office of the president, vice president, governor, deputy governor and issues from the national industrial court. It is currently made up of forty nine (49) judges.

3. The National industrial court of Nigeria

The federal high Court is headed by a chief judge of the federal high Court appointed by the president on the recommendation of the NJC subject to ratification by the senate. The jurisdiction of the various state high courts are very wide and perhaps the widest jurisdiction both in criminal and civil matters. It enjoys superiority over magistrate, customary and Area courts.

Also read: 21 Leading Cases in the law of contract you must know

Sharia Court of Appeal is another important court in the hierarchy of courts in Nigeria. It is provided for in Section 260 of the 1999 constitution of the Federal Republic of Nigeria. However, Section 275 of the same constitution made it discretionary for any state in Nigeria to establish its own Sharia Court of Appeal. The section provides as follows:

The constitution provides that the Sharia Court of Appeal is to be headed by the Grandi Kadi, which is to be prescribed by the House of Assembly of that state.

It is pertinent to note that Sharia Court of Appeal has supervisory and appellate jurisdiction in civil cases that has to do with Islamic personal law. Only in this instance, can appeal go to this court.

There is a customary court of appeal in states and in the Federal Capital Territory. It is usually headed by the president of the customary Court of appeal and its major function is that of supervisory and to hear appeal in issues that concerns customary law.

Take for instance, in matters that concerns the ownership of land or inheritance right of Women like the case of Mojekwu v Mojekwu, the Customary courts have jurisdiction of such matters.

Also read: Are lawyers liars? Find out the truth here

Apparently, Magistrate Courts and District Courts are not provided for in the 1999 constitution of the Federal Republic of Nigeria. These courts is the last in the hierarchy of court in Nigeria and is established by the House of Assembly of State. Most times Magistrate Courts and District Courts function as court of summary judgment. In the Southern part of Nigeria, these courts are referred to as magistrate court. Whereas they are referred to as District court in the North.

Since Magistrate Courts and District Courts are established by the House of Assembly of state, the Jurisdiction of the court is usually outlined in the rules of the court.

Features of the 1979 constitution of Nigeria

Above I have explicitly outlined the hierarchy of in Nigeria. Just like I noted in the beginning of this article, the courts above have original and Appellate jurisdiction to handle certain matters. Thus, a matter that is supposed to be handled by the Supreme Court under Section 231 of the constitution of Nigeria, cannot be brought under the original jurisdiction of the court of appeal.

As a lawyer or law student in Nigeria, this is the most important thing you must understand because it is the foundation of legal practice in Nigeria.

Hope this article was helpful? I believe you now understand the structure of courts in Nigeria. Nonetheless, if there is any confusion on the hierarchy of courts above, don’t hesitate to point it out by commenting on the comment box below. I will try to make you understand.

3 thoughts on “Hierarchy of Courts In Nigeria: The Superiority of Courts in Nigeria Explained”