Home » Legal Articles » Characteristics of a Valid and Binding Contract

Characteristics of a Valid and Binding Contract 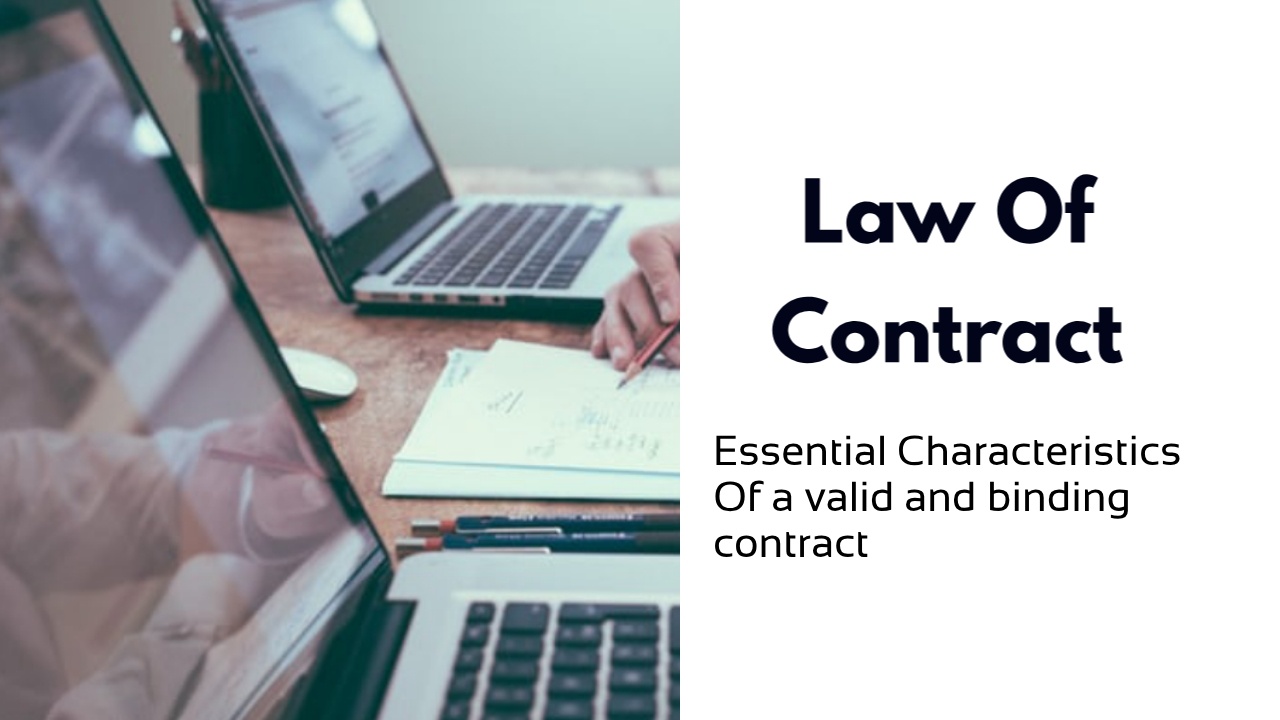 Apparently, there are contracts which the law will enforce and contract which the law will not enforce or consider binding due to the absence of some requirements. In this article, i am going to explain some of the characteristics of a valid and binding contract. This is basically to guide students, lawyers and even traders in their day-to-day business transactions.

I enjoin you to read this topic painstakingly as I pen down the 7 (Seven) major characteristics of a valid and binding agreement. Trust me; you will not regret reading this article.

What is a binding contract?

A contract is an agreement made upon sufficient consideration to do or not to do a particular thing. It is an agreement that is enforceable by the law, between two or more persons to do or abstain from doing some acts; their intention being to create legal relations and not merely to exchange mutual promise. 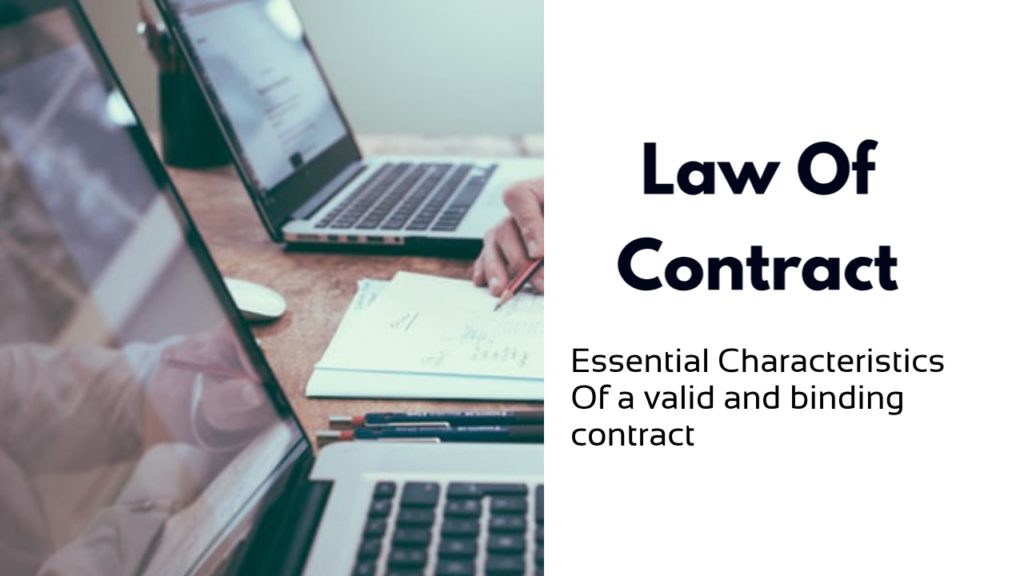 characteristics of a valid and binding contract

You will agree with me that the commercial and economic life of people in the society consist of contract. It will be chaotic in trade and commerce if the law permits promisors to break their promises without, at least, placing them under an obligation to pay compensation to the promisee for the loss caused by their default.

Leading cases in the law of contract that you must know

Exceptions to the privity of contract rule

Donoghue v Stevenson: Facts, Issues and Decision of the court

Mojekwu v Mojekwu: Facts, Issues and Decision of the court

Smith v Selwyn: Facts, Issues and Decision of the court

Characteristic of a valid contract

Below are the essential elements of a valid contract:

There you have a list of the elements of a valid and binding agreement. Each of these elements will be extensively discussed as we continue. Now, let talk about the first element.

For academic purposes, i will define an offer as the expression of willingness to contract on certain terms made with the intention that it shall become binding as soon as it is accepted by the person whom it is addressed.

Like I have already stated, an offer is the first ingredient to look out for in ascertaining whether there is a contract or not. Where there is no offer, there is no contract.

In Dahiru v Kamale [2005] 9 NWLR (PT 929)50, Ogbuagu JSC said that an offer is an expression of readiness to contract on the terms specified by the offeror which if accepted by the offeree, will give rise to a binding contract. In other words, it is by acceptance that the offer is converted into a contact.

In order for a proposition to amount to an offer capable of acceptance, four conditions must be satisfied: 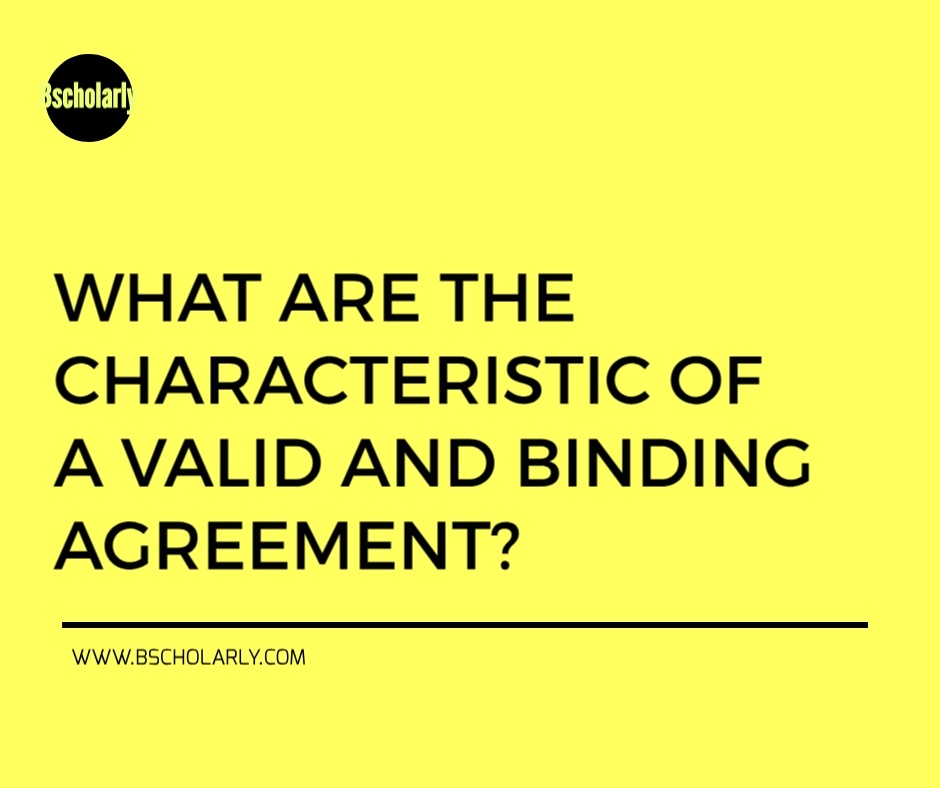 Characteristic of a valid and binding agreement

2. There must be acceptance of the offer:

The second characteristic of a valid and binding contract is acceptance. An offer which has been made and has not been withdrawn or terminated must be accepted before it can result in a contract.

Simply put, acceptance is the final and unqualified expression of assent to the terms of an offer. In Dalek (Nig) Ltd v OMPADEC [2007] 7 NWLR (PT 1033) 402, Ogbuagu JSC noted that a qualified acceptance of an offer cannot give rise to a binding agreement between the parties.

Aboki JCA has also defined acceptance as the reciprocal act or action of the offeree to an offer in which he indicates his agreement to the terms of the offer as conveyed to him by the offeror. His Lordship went further to say that an acceptance of an offer may be demonstrated by:

Acceptance is as important as an offer in a valid and binding contract because it shows that the offeree is will to contract on the terms proposed in the offer. No doubt, it is one of the major characteristics of a binding contract.

See how to become a successful lawyer

3. There must be consideration:

Consideration is another essential characteristics of a valid contract which is not under seal. The term “consideration” has been defined as the price for which the defendant’s promise is bought. This definition was given by Pollock in his book “Principles of contract“. To sustain an action in contract, the plaintiff must establish either that the contract is contained in a document under seal, deed or that it is supported by consideration.

What this really means is that the plaintiff must give something in return for the promise made to the promisee. That price or something given is what is known as consideration. A consideration may take several forms. Eg, it may be a mere promise, an act, a right conferred on the defendant, a benefit given to the defendant or even a forbearance suffered by the plaintiff.

The position of the law concerning consideration was extensively explained by Lush J in Currie v Misa [1875] LR 10 Exch 153. In that case, Lush J held that a valuable consideration in the eye of the law may consist either in some right, interest, profit or benefit accruing to one party or some forbearance, detriment, loss or responsibility, given suffered or undertaken by the other.

In light of the above information, consideration does not only consist of profit by one party but also exist where the other party abandons some legal right in the present, or limit his legal freedom of action in the future as an inducement for the promise of the first.

It is irrelevant whether one party benefits but it is enough that he accepts the consideration and that he party giving it does thereby undertake some burden, or lose something which is contemplation of law may be of value.

MUST READ: Differences between rigid and flexible constitution

4. Intention to create legal relations between the parties:

So far, we have agreed that for a valid contract to result there must be an offer and a corresponding acceptance supported by consideration in some cases. It does not stop there. Another important characteristics of a valid and binding contract is the presence of an Intention to create legal relations between the parties.

“contracts must not be the sport of an idle hour, mere matters of pleasantry and badinage, never intended by the parties to have any serious effect whatsoever”

Some legal scholars are of the opinion that there is actually no need to include the requirement of “intention” to support a valid and binding contract. However, it is clear that the element of intention to enter into legal relations has come to stay in the common law of contract.

In fact, the document was a deed transferring the very house in which the tenant lived to the tenant himself as owner.

Mr. Chicken, proceeded to sell the property to an innocent purchaser. It was held that the document or deed was void and that Mr. Thoroughgood remained the owner of his house because there was no intention to contract on such terms.

5. The parties must have contractual capacity:

Even when all other characteristics of a binding agreement or contract has been met, it may nevertheless turn out to be illegal, voidable or unenforceable as a result of the kind of persons who entered into the contract.

It is important to note that a contract may not be enforceable against certain categories of people who enjoy special status in contractual transactions.

This privilege is intended as protection for people who, because of their circumstances, can easily be exploited or defrauded in the making of contract. This protected group includes infants, persons of unsound mind or lunatics, drucken persons, married women and illiterates.

MUST READ: 7 Defences to strict liability

6. The contract must not be unlawful or contrary to public policy:

If a contract is contrary to a law inforce, then it lacks a very important characteristics of a valid and binding contract. An unlawful contract or illegal contract is a contract that is expressly prohibited or forbidden by law and whose formation is usually followed by a penal sanction.

An example of a law that protect a class of people is the illiterate’s protection Act. It provides in section 3 that any person who writes or prepares a document at the request of, or on behalf of, an illiterate person, must read it over and explain the content to the illiterate person before the latter signs it or makes his mark on it. A case that clearly shows this is the Thoroughgood’s case which earlier explained in this article.

7. The contract must be in the form required by law:

Sometimes, the law may that a particular kind of contract should be in a particular format. For instance, the law may provide that contracts that has to do with transportation must be in written form. If the law provides for this, then any contract that has to do with transportation, but does not follow this rule, is not valid and cannot be binding.

The law can also provide that the contract should take the shape of mere writing, embodied in a deed or requirement of authentication by a notary or magistrate. The rationale for this is to promote certainty in law and to prevent a person from being bound by a hasty promise.

An example of a law that requires that a contract must be in written form is the Statute of Fraud of 1677. In section 4 of this law, it provides that no action shall be brought whereby to change the defendant upon any special promise to answer for the debt, default or miscarriage of another person unless there is written evidence of the promise.

This will be an essential characteristics of a valid and binding contract in states where the Statutes of Fraud applies.

Are lawyers liars? Read the truth as to whether lawyers are liars or not

Offence of rape in Nigeria: Everything You Need to know about

By way of conclusion, i must remind you that, what you just read are the essential elements of a valid and binding contract. Where any of these elements or characteristics is not present in a contract between two persons and there is a default, the court may not enforce the contract. So, as a trader doing business in any part of the world, you must take notice of this because it concerns you the most.

Hope this article was helpful? I would love to hear from you anyway. If you have any question or contribution to this topic, kindly send it using the comment section.