Largest Libraries In The World 2022 (With Pictures): Top 10 Biggest 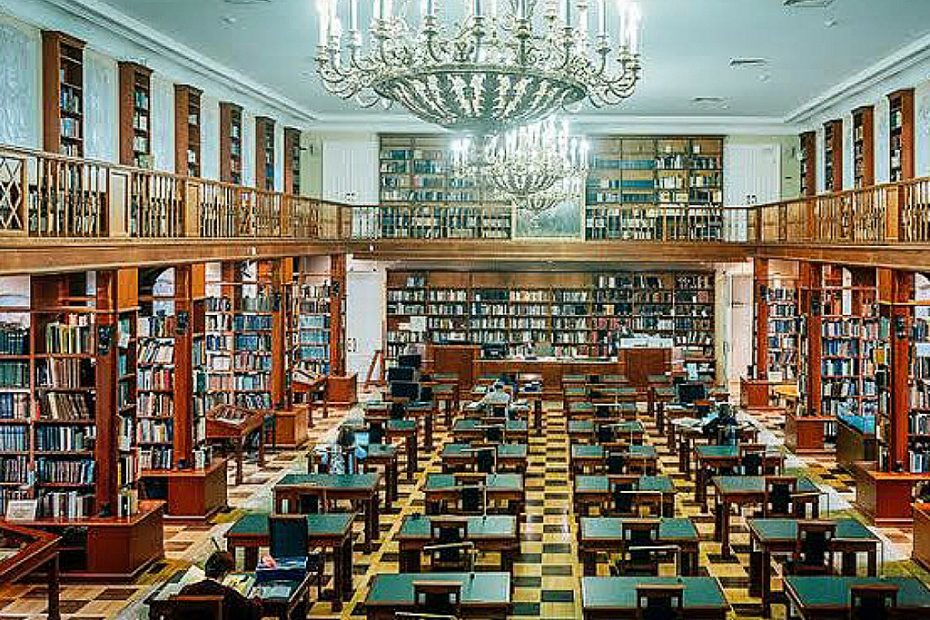 Largest Libraries In The World: The purpose of this article is to inform, educate, and entertain you about the world’s largest libraries and their locations. The term “library” today appears to be used in a variety of contexts, ranging from the traditional public library to the digital library. Libraries are vibrant spaces where librarians assist patrons in locating the finest source of information, whether it’s a book, a website, or a database entry.

A library is a structure or room that houses a collection of books, periodicals, and occasionally films and recorded music that can be borrowed or used by the general public or members of a particular institution. It can also be defined as a space set aside for the storage of books, magazines, and other reading, viewing, listening, study, or reference materials. We’ll tell you about the top ten largest libraries in the world in this article.

Recommended: Countries with the best Education system in the world

Largest and Biggest Libraries in the world 2022

1. Library of Congress, United State: The Library of the United States of America is also the world’s largest library. The National Audio-Visual Conservation Center, a distinct campus in Virginia, is a federal institution on Capitol Hill in Washington, D.C. The library has study materials from all over the world in its collection. 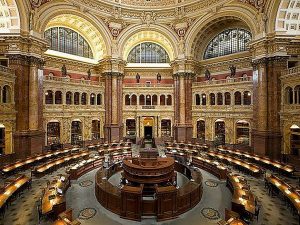 The Library of Congress has 450 languages from around the world on display. In Washington, D.C., the library opened its doors. The library, which opened in 1800 in Washington, D.C., has been damaged and destroyed multiple times, including by the British in 1814 during the War of 1812 and a roaring fire in 1851.

After the American Civil War, it flourished and expanded, and it began collecting books and major publications from all over the world. Even though the library is open to the public for tours, only high-ranking government officials have access to its volumes and materials nowadays. The library is involved in several projects aimed at promoting American literature and art.

2. The British Library, United kingdom: With a collection of 150 million books, manuscripts, journals, music recordings and scores, patents, databases, and other items, the British Library is the world’s second-biggest library. 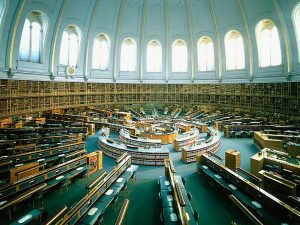 Biggest Libraries In The World

The National Library of the United Kingdom is located in London, between the Euston and St. Pancras train stations. On July 1st, 1973, the British Library Act 1972 established the library as a separate organization. 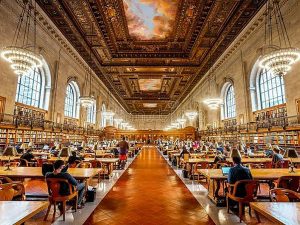 Best Libraries in the World

The formation of this huge network of libraries, which is today sponsored by both government and private institutions, originated from the amalgamation of small and large libraries, including libraries of book enthusiasts and affluent millionaires in New York.

The library’s main branch, at the corner of Fifth Avenue and 42nd Street in New York, is open to the public. The National Historic Landmark designation was given to it in 1965. The New York Public Library now has four research libraries, as well as branches in the Bronx, State Island, and Manhattan, as well as several smaller libraries.

4. Library and Archives Canada: The Library and Archives of Canada, the world’s fourth-biggest library, is run by Canada’s federal government. The institution has been entrusted with the monumental duty of conserving Canada’s heritage documentaries and making them accessible to the general public. Nearly 20 million books, 24 million images, private and government archives, aboriginal magazines, non-fiction and fiction films, Canadian journals, and more are among the present holdings. 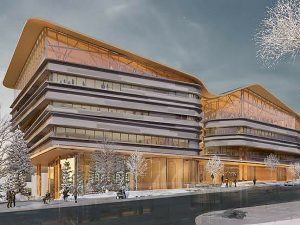 Second largest library in the world

The announcement of the Canadian Constitution Act, the first-century book by historian Flavius Josephus, Glenn Gould’s chair, and the British North America Act are among the library’s most cherished possessions. The National Library of Canada and the National Archives of Canada merged in 2004 to become the Library and Archives of Canada, which reports directly to the country’s Parliament. 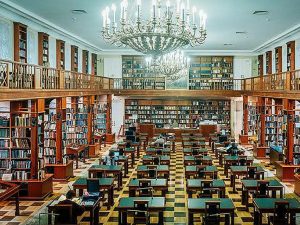 Largest Libraries in the World by Collection Size

The library now houses 17 million volumes, 13 million periodicals, 150,000 maps, and thousands of music albums and scores, among other things. Fedorov Alexander I Visually, Vladim Gnezdilov, and Viktor V. Fedorov are the directors of one of the world’s largest libraries.

There are also products in 247 different languages from throughout the world, with the foreign section accounting for around 29% of the whole collection. The Russian State Library is located in Moscow, the country’s capital, and is open to the general public. It was established on July 1, 1862.

6. Bibliotheque Nationale De France: This library, which is ranked sixth, has a total of 40 million books and is one of the world’s largest libraries. This library was constructed in 1368 in Paris, France, when Charles V established a royal library at the Louvre Palace, but it was eventually lost. 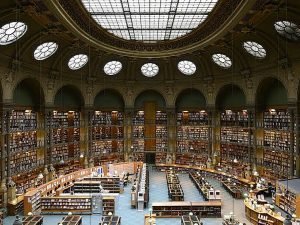 List of Largest Libraries in the World for Competitive Exams

However, in 1461, Louis XI started a new one, which subsequently enlarged and became open to the public in 1692. It was developed and established under the direction of the Ministry of Culture to store copies of work published in France.

This particular library, which was named the world’s largest library in 1896, adds roughly 150.000 documents to its collection each year. The volumes survived the French Revolution thanks to the efforts of a few librarians and experts. It currently has a $288 million annual budget and approximately 1.3 million annual visitors.

Also see: How to read for long hours Without getting tired 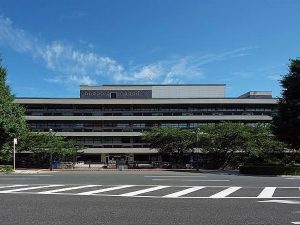 Largest library in the UK

8. National Library of China: This library in Beijing, China, was founded on September 9, 1909, but it was publicly launched in 1912. It is one of Asia’s largest libraries. The Imperial Library of Peking, as it was known when it originally opened in 1912, has a long and illustrious history. 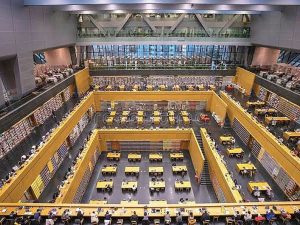 It went through several more name changes after that until it arrived at its current position. This library serves as the People’s Republic of China’s national library and has the world’s largest and most diverse collection of Chinese literature and historical documents. The National Library also has approximately 35,000 Shang era inscriptions on oracle bones and tortoise shells Contains official UN and foreign government publications, as well as a collection of books and materials in over 115 languages.

The National Library of China is said to get around 5.2 million visits each year. A total of 1,365 people work at and maintain the library. This library, which is ranked eighth on our list, has a total of 37 million items.

9. Royal Danish Library, Denmark: The beginnings of the Royal Danish Library may be traced back to King Frederick III in the year 1648. It was, nevertheless, opened to the public in 1793. It was combined with the famed Copenhagen University Library and then with the Danish National Library for Science and Medicine, which is today known as the Faculty Library of Natural and Health Sciences. 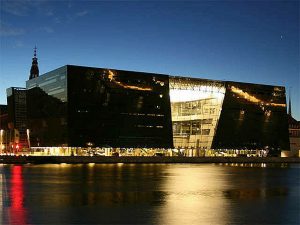 Biggest Libraries in the world 2022

Books, journals, periodicals, pamphlets, corporate publications, manuscripts and archives, charts, prints and pictures, music scores, and documentation of popular traditions are among the 35,400,000 objects in the Royal Danish Library. The first Danish book, published in 1482 by Johann Snell, is one of the great highlights of the history held in just this Black Diamond-shaped library.

The library’s main goal is to archive, comprehensively document, and document bibliographically all German and German-language publications published since 1913, as well as foreign articles about Germany, translations of German works, and works by German-speaking emigrants published abroad between 1933 and 1945, and make them available to the public.

More than 2 lakhs of people use this central archival library, which includes roughly 32.6 million items. It operates out of three locations: Frankfurt, Leipzig, as well as Berlin.

Recommended: Most beautiful countries in Africa

I truly hope that this post has been of tremendous assistance to you in the way that you imagined. There has been some argument over which libraries are the largest over time, and these debates have left people perplexed, but not with this article.

I hope that these disagreements will be reduced or eliminated because the libraries listed above are the largest of the libraries in the world. If you enjoyed this post, please share it with your family and friends, and if you have any unanswered questions, feel free to use the comment box.