Home » Tech Updates » Most Powerful/Dangerous Bombs In The World 2022: Top 10

Most Powerful/Dangerous Bombs In The World 2022: Top 10 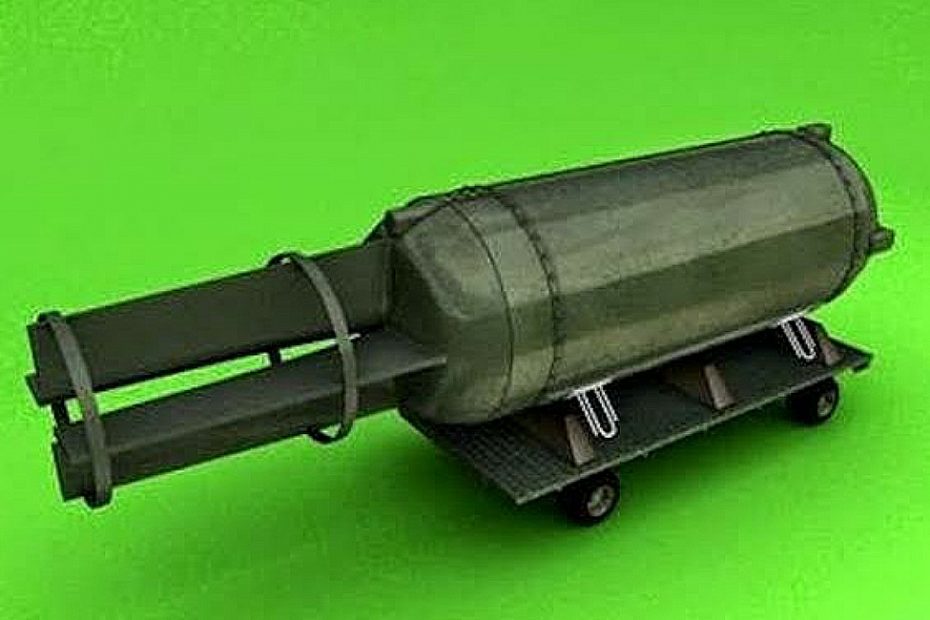 Most powerful bombs in the world 2022: Our nature as humans causes us to escalate conflicts into war when things don’t go our way. Hence, People have been driven to make weapons to defend themselves from their adversaries as a result of these wars breaking out. Weapons have evolved throughout history, just like everything else. Unshaped stones and wooden spears are said to have been the first kind of weapons used by humans for self-defense or hunting. Over time, man developed the notion to sharpen the stone and so make it more lethal due to a variety of drawbacks, including short range and inaccuracy. As a result of all the ground-breaking scientific and technical advancements throughout the millennia, man has been able to create nuclear weapons ( bombs) with increasing intelligence and consciousness.

It seems to reason that bombs are more lethal than any other weapon developed to date— they are the world’s most potent weapon. One might conceivably murder millions of people by destroying an entire metropolis, endangering the ecosystem and the lives of future generations as a result of its long-lasting devastating impacts.

Consider the 1945 bombs in Hiroshima, Japan. Ionizing radiation, a powerful shock wave, and a tremendous quantity of heat were all created instantly by the explosion. Furthermore, the injuries and illnesses that followed took a huge toll due to wind-borne radioactive debris high in the atmosphere.

Despite this, studies have proven that there are several categories of explosives similar to the Hiroshima bombing and some that are even more potent. Therefore, they will be discussed in this post as we analyze the Most Powerful Bombs in the World in 2022.

1. Tsar Bomba: Tsar Bomba, the RDS-220 hydrogen bomb, is the largest and most lethal thermonuclear bomb ever exploded. It possesses the same amount of explosive force as 3,800 Hiroshima bombs. On October 30, 1961, the Soviet Union detonated it above Novaya Zemlya Island in the Russian Arctic Sea. 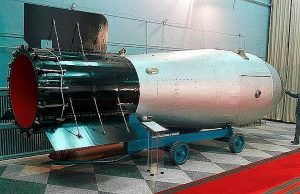 Most Powerful Nuclear Bombs in the World

To their dismay, researchers found that the bomb’s shockwaves traveled 560 kilometers, smashing windows in Norway and Finland. Third-degree burns might be caused by the explosion’s heat up to 62 miles distant (100 kilometers). A Tu-95 aircraft dropped the hydrogen bomb into the atmosphere.

2. Soviet Test 119 (1962): An intercontinental ballistic missile (ICBM) was used in Test #219, an atmospheric nuclear test, to deliver the bomb, which detonated 2.3 miles (3.8 kilometers) above sea level. It was the second-most powerful nuclear explosion ever, with a yield of 24,200 kilotons and a 25-mile destructive radius (41km). 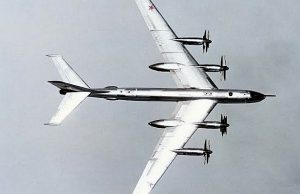 Also see: Countries with the Most Nuclear Weapons

3. Castle Bravo: Nuclear weapon TX-21, popularly referred to as the “Shrimp,” and Castle Bravo. The thermonuclear bomb was a mission that the US conducted at Bikini Atoll on March 1st, 1954. Nuclear rain, a direct product of the explosion, poisoned the islanders when they returned after the catastrophe. The crew of the Japanese fishing vessel Lucky Dragon No. also suffered from poisoning. 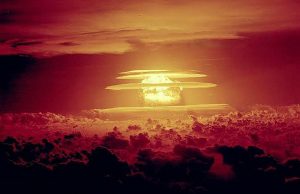 biggest and most powerful nuclear weapons ever built

Castle Bravo’s bombing capability, expressed in kilotons, was 1,200 times more than the bombs detonated on Hiroshima and Nagasaki.

4. The Little Boy And The Fat Man: On August 6, 1945, an Enola Gay bomber detonated an atomic bomb on the Japanese city of Hiroshima under the code name “Little Boy” (B-29 Super Fortress). Colonel Paul Tibbets of the US Air Force’s 393rd Bomber Squadron piloted the aircraft. It was the first atomic bomb ever to be deployed in combat. It was dropped three days before the second bomb on Nagasaki was dropped. During World War II, the Manhattan Project included the development of this weapon. Uranium 235 nuclear fission is the source of its explosive force. 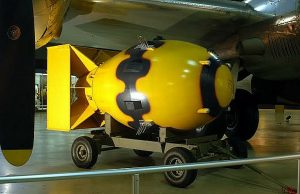 The monster atomic bomb that was too big to use

The bombing of Hiroshima was the second nuclear explosion to be created artificially in human history.

5. Test 123 (Joe 106): The Soviet Union tested a nuclear weapon on October 23, 1961, and that test was known as Test 123. Compared to the “Tsar Device,” the bomb was detonated one week sooner. The Hiroshima bomb is thought to have been 830 times less powerful than Test 123. In NZ Area C Sukhoy Nos, Novaya Zemlya, the test was carried out. About 12.5 megatons of energy were produced by this weapon. 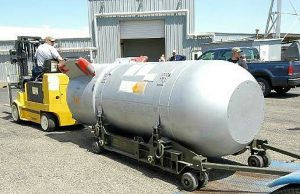 Top 10 most dangerous bomb in the world

A tiny community used to reside in the region before the test was carried out, according to information included in the article from the Journal Polar Geography published in 1966.

6. Mk-24/B-24: A huge thermonuclear weapon known as the Mk-24, commonly referred to as the B-24 or Mark 24, was created by the American military between 1954 and 1955. About 105 of these devices were built in less than a year and were conceptually based on the Castle Yankee bomb tests. 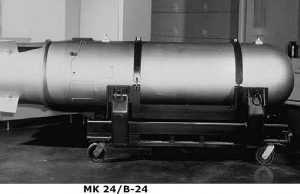 Most Powerful Nuclear Bombs Ever Tested

Over 296 inches long and weighing over 42,000 pounds, the bomb itself was enormous. Despite never being formally tested, because of its capacity for destruction, the Mark 24 was given a 64-foot parachute that would delay its fall and give the bomber crews plenty of time to flee the blast zone.

7. The B41 nuclear bomb: Early in the 1960s, the United States developed the B41 Nuclear Bomb, often referred to as the Mk-41, a three-stage thermonuclear weapon. The maximal yield of the weapon was anticipated to produce up to 25 megatons of destructive energy upon explosion, making it among the most potent bombs ever built by Americans. 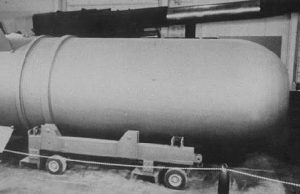 Most powerful bombs in the world

Researchers contend that, although having a lower yield than the most potent bomb on our list, the B-41 was the most effective thermonuclear weapon ever constructed, keeping the best yield-to-weight ratio of any weapon ever made. 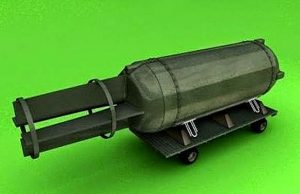 It boasts the world’s strongest vacuum bomb, and testing on that weapon’s effectiveness and power suggests that they are comparable to nuclear weapons. Despite having a lesser tonnage than the American MOAB, the Russian bomb is nonetheless four times as potent.

Recommended: Most powerful country in Asia

10. GBU-43/B Massive Ordnance Air Blast (MOAB): MOAB, sometimes known as the “Mother of All Bombs,” is a high-yield bomb designed for use against terrorists and their subterranean training facilities. It is a lethal non-nuclear weapon in the American arsenal designed to destroy subterranean bunkers and facilities. The bomb is intended to be delivered by a C-130 Hercules.

MOAB was the most powerful conventional bomb in the Pentagon’s arsenal, working on the concept of vacuum, and acts on all objects on the ground and underground, with a shock wave and high temperatures.

Recommended: How To Backup Whatsapp Without Google Drive

Bombs now outperform all other weapons created to date, namely due to their tremendous destructive force, which can destroy a whole city and a major portion of the population, and radiation from a nuclear assault would last for decades. This kind of weapon has only ever been used twice in history due to its high lethality and potential for destruction. Nations have engaged in negotiations for weapons control accords, but accomplishing this aim has proven to be a very challenging task.